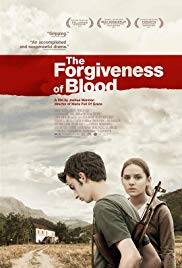 Storyline:
This film centers on a family in Albania, with main characters Rudina, the oldest daughter, and Nik, the oldest son. Both have a pretty normal life. Rudina is an A-student in high school hoping to continue on at university; Nik, very popular, is just falling in love with a classmate while dreaming of opening a business with a friend. Their father earns the family’s income through a little bread delivery service, for which he shortcuts across his neighbours’ ground. The neighbour resents this, even though the ground had actually once belonged to Rudina’s and Nik’s family. One day the conflict escalates and the neighbour gets killed by Rudina’s and Nik’s father and their uncle. Because the police only catch their uncle while their father successfully goes into hiding, the old law of blood feud is invoked against the family, whereby all males enter into virtual house arrest. Since only the women of the family can leave, Rudina has to quit school to continue her father’s bread delivery …
Written by
Anonymous
User Reviews: Belgian playwright and poet Maurice Maeterlinck said, "At every crossroads on the path that leads to the future, tradition has placed 10,000 men to guard the past." As demonstrated in Joshua Marston’s second feature, The Forgiveness of Blood, customs, traditions, dogmas, and deeply embedded ways of thinking that were once pertinent can become irrelevant and even damaging with the passing of time. An example is the Albanian Kanun law, an uncodified collection of customs and rules perpetuated by word of mouth since the fifteenth century. Incongruously existing side by side with high-definition TV, Facebook, cell phones, and texting, these traditions are anathema to the lives of many young Albanians.

As the film opens, an ancient horse-drawn cart plods its way along a narrow road surrounded by a broad expanse of open fields. On land previously owned by his grandfather, the driver Mark (Reft Abazi) and his teenage son Nik (Tristan Halilaj), a senior in high school, use the road to earn their living selling bread. Resentful and jealous, Sokol (Vetan Osmani), the current owner of the land, creates obstacles to the father and son accompanied by growing threats. The deep-seated antagonism rooted in years of jealousy and animosity is revealed at the local pub when insults are exchanged that stop short of violence. When Sokol closes the road, however, to Mark’s cart and threatens him with a knife in the presence of his adolescent daughter Rudina ((Sindi Lacej), Mark returns with his brother (Luan Jaha) and Sokol is stabbed to death in a murder that takes place off-camera.

The brother is arrested and sent to jail for eighteen years, while Mark, accused of complicity in Sokol’s murder, goes into hiding. One of the unwritten laws is the stricture that, in the case of blood feuds or other crimes between neighbors, an entire family must suffer the consequences of the crime even if only one member is guilty of the offense and that the family of the deceased can extract retribution by killing a male member of the guilty clan. The blood feud and the application of the Kanun law hits hardest on the two older children as well as young Dren. Rudina, who has dreams of going to university, is forced to leave school to take over father’s business of delivering bread which she expands to include other items.

Nik, however, whose ambition includes wanting to open an Internet café, is chained to the home possibly for a long period of time, afraid to venture out for fear of retribution. The Forgiveness of Blood is not only a story about a conflict between past and present, but an exploration of the inner lives of people in a culture that we in the West are hardly even aware of. As in Marston’s 2004 acclaimed Maria Full of Grace, his latest film is filled with a powerful authenticity racked with unnerving tension that tells a potent story of unfulfilled hopes and dreams. Immersing himself in the culture, Marston interviewed families living in isolation as mandated by the Kanun law, and shows events as they unfold without judgment or evaluation. With local first-time actors, Lacej and Halilaj giving nuanced and convincing performances, the result is a film of great humanity.