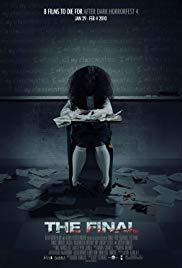 Storyline:
A group of high school outcasts get revenge on the students that torment them.
User Reviews: Well this movie was a surprise. I was expecting some mediocre mass-produced horror flick, but it proved to be much more than that.

There is a genuine disturbing aspect to the story of this movie. It shows the darker and scarier sides of mankind’s mentality and the lengths of which some will go. Of course, what happens in the movie is a bit out there and a bit too over the top, but still there is some sense of disturbing reality to it. And that is what makes this movie so cool, the essence of its twisted character.

The cast of the movie did a good job in bringing their characters to life in believable ways, and hats off to them for that. For without these performances the movie would not work as well as it did.

And it was also a nice touch to see references to other horror movies, especially the reference to one of my all time ever favorite horror movies, the Japanese movie "Audition". This surely brought a smile to my lips.

This movie is not scary in the tradition sense of trying to scare you out of your seat, but it plants a seed of forebrooding dread, a seed that blooms throughout the movie as the events come to be. This movie gets under your skin and will stay with you for some time, as it bears many similarities to events that have happened throughout the years, or events that would very likely come to happen.

I recommend this movie strongly, especially if you like movies that give you stuff to think about. Do not expect to be scared out of your mind, but know that you will be in for some psychological thrills and scares.

This movie should not be missed.