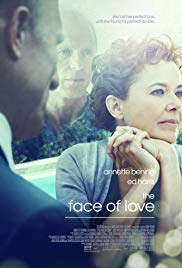 Storyline:
A widow falls for a guy who bears a striking resemblance to her late husband.
User Reviews: Along with ‘The Angriest Man In Brooklin’ this is an example of a film that Robin Williams made late in his life that was released straight to DVD (in the UK at least).

I think it is one that is well worth seeking out though because although Robin only plays a supporting role, he says so much through his lovely characterisation and facial expressions that you really believe in his character of Roger.

Annette Benning and Ed Harris are the ones that really carry the film though and although the ending is perhaps a little rushed, the rest of the film is an engaging and interesting love story.

So overall although the cover of the DVD (I can only vouch for the UK edition) will lead you to believe that Robin Williams is in it a lot more than he is, the film itself is well worth watching.