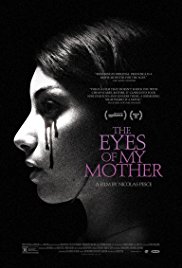 Storyline:
In their secluded farmhouse, a mother, formerly a surgeon in Portugal, teaches her daughter, Francisca, to understand anatomy and be unfazed by death. One afternoon, a mysterious visitor shatters the idyll of Francisca’s family life, deeply traumatizing the young girl, but also awakening unique curiosities. Though she clings to her increasingly reticent father, Francisca’s loneliness and scarred nature converge years later when her longing to connect with the world around her takes on a dark form.
Written by
Ulf Kjell Gür
User Reviews: I saw this at the Phoenix Film Festival and this is tied, with Under the Shadow, as my favourite horror film from the Festival. (I did indeed see them all.) I’m rating this one higher, though, because if I had to nitpick, the other movie’s ending wasn’t perfect, and this one nailed everything.

Kika Magalhaes attended the screening and did a Q&A where she discussed her influences on her performance. One was clear while watching it – Audition. Her character, Francesca, behaves, in some instances, very similarly to Asami. If this alone doesn’t get you excited to see the film, you’re probably not a horror fan.

I love the choice of black and white for the film. It dulls the gore without lessening the impact of the violence. This makes it easier for the squeamish, but in no way detracts from the horror on the screen.

And make no mistake, this movie is horrifying – in the best possible ways. Expertly acted, and directed. The cinematography was outstanding. Overall, best horror I’ve seen in a long time.