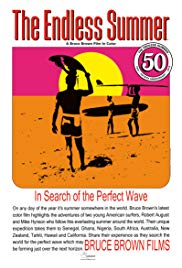 Storyline:
They call it The Endless Summer the ultimate surfing adventure, crossing the globe in search of the perfect wave. From the uncharted waters of West Africa, to the shark-filled seas of Australia, to the tropical paradise of Tahiti and beyond, these California surfers accomplish in a few months what most people never do in a lifetime…They live their dream. Director Bruce Brown creates a film so powerful it has become a timeless masterpiece that continues to capture the imagination of every new generation. When it first played in theaters, audiences lined up to see it again and again, spellbound by its thrilling excitement and awesome photography. But in fact, what’s most compelling about the film is the sport of surfing itself, and once you’ve seen it, you’ll never forget why.
Written by
Anonymous
User Reviews: Forget the Hollywood teen scene movies from the 60’s with Frankie and Annette. That was teen exploitation (and the teens knew it and didn’t watch them, either). This movie is completely different.

"Endless Summer" is not exactly a drama, but not exactly a documentary either. You follow two young surfers as they travel the globe looking for the elusive "Endless Summer" of year-round surfing. The narration is hilarious and the surf action will make even the novice landlubber want to grab a raft and skip across the backyard pool.

Surfers will own it already, but for those who haven’t seen it – see it.

Storyline:Tess is a young fashion designer who develops a strong bond with a fellow passenger during a ride-sharing trip. However, she soon realizes that her new friend has a dark agenda - making sure that Tess never ...

Storyline:It's all fun and games until things turn deadly. Shouldn't a 'mom' know better...?User Reviews: Krista Allen is fantastic as the "party mom", but it's not enough to save this one. The story idea wa...