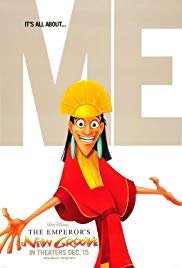 Storyline:
In this animated comedy from the folks at Disney, the vain and cocky Emperor Kuzco is a very busy man. Besides maintaining his “groove”, and firing his suspicious administrator, Yzma; he’s also planning to build a new waterpark just for himself for his birthday. However, this means destroying one of the villages in his kingdom. Meanwhile, Yzma is hatching a plan to get revenge and usurp the throne. But, in a botched assassination courtesy of Yzma’s right-hand man, Kronk, Kuzco is magically transformed into a llama. Now, Kuzco finds himself the property of Pacha, a lowly llama herder whose home is ground zero for the water park. Upon discovering the llama’s true self, Pacha offers to help resolve the Emperor’s problem and regain his throne, only if he promises to move his water park.
Written by
Richard Hudson
User Reviews: Disney has done it again with a FUNNY FUNNY FUNNY FUNNY (how many funnies is that? 4?…not enough) FUNNY FUNNY FUNNY (you get the point) movie.

Picture this. 2 friends and I walk into a local movie rental shop and start arguing over the NEW releases. Horror movie? No. Slasher flick? No. Drama? No. Etc, Etc, Etc. Finally, as if it were fate, we all walk into the Disney/Children section of the shop. One suggest "Emperors New Grove". The rest automatically agree… and we weren’t disapointed.

David Spade is brilliant as the voice of the Emperor in this movie. His humour was definatly evident throughout the entirity. Speaking of the humour… it was funny. Ha, ha. Ain’t I a kidder? Seriously though, I have to say that this is the funniest Disney movie that I’ve ever seen… and it’s definaly because of the cast… who were brilliant in all their roles. There was a lot of adult humour in this one though. Nothing gross or sexually oriented or anything, but just grown up… intelligent… making it a fabulous watch.

If you haven’t seen this, then I suggest you do… and soon.