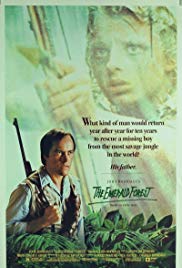 Storyline:
Based on a true story, Powers Boothe plays an American dam engineer in Brazil. Boothe’s son (played by Charlie Boorman – son of director John Boorman) is kidnapped by a rain forest tribe, and raised as one of their own. Boothe continues to look for him and after many trials and adventures, stumbles upon him.
Written by
A. Felhofer <[email protected]>
User Reviews: A definite source for The Emerald Forest is the book, Wizard of the Upper Amazon, by F. Bruce Lamb. The story is a second hand account of Manuel Cordova’s kidnapping when he was a teenager working for rubber cutters in the Amazon in the early 1900s. He was taken by a group of Indians to a very remote, primitive Indian village. These Indians were of a fierce independent disposition, and had fled into the interior because they refused to exist in the subservient situation imposed on them by the rubber barons of that time. Cordova was incorporated into their tribe and describes a life strikingly similar to the one depicted in The Emerald Forest. The similarities include the adversarial tribe, the reason The Invisible People moved further into the Jungle, and the tribal ceremony with the hallucinogenic.

Storyline:Lonely and love-struck, high-school student Hiroki pursues one girl but another one mysteriously appears in his life. Is she a figment of his lonely psyche, or real? An intricate triangle develops, and the v...