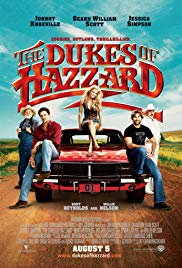 Storyline:
Bo and Luke Duke are southern cousins. In Hazzard County, Bo and Luke help their Uncle Jesse and their sexy cousin Daisy run the Moonshine business and always getting into trouble with Sherriff Roscoe P. Coltrane and recklessly driving in their orange car “General Lee”. Boss Hogg, the mean and corrupt local county commissioner who hates The Dukes evicts The Dukes from their farm. Bo and Duke travels to Atlanta and meets up with old friend Katie Johnson and her friend Annette as they set out to find out why Boss Hogg has evicted them from their farm and what he plans to do. With local ace race car driver Billy Prickett in town to take part in the Annual Hazzard Road Race rally, Bo and Luke sets out to save their farm and foil Boss Hogg’s scheme.
Written by
Daniel Williamson
User Reviews: I had low expectations when going to see this film, so I wasn’t disappointed: it was a lot better than I expected.

A lot of the jokes are corny and the plot is weak, but I have to say that the audience I saw it with thought it was hilarious. There was a lot of laughing throughout the film, some of it at Willie Nelson’s terrible jokes (and he has a stack of them), some at the various situations and some at the antics of the Duke cousins. I was in need of cheering up and had a good cackle at this. A lot of the driving sequences were highly enjoyable.

Not Oscar winning material, but a good laugh. Don’t take it seriously and you may enjoy it!