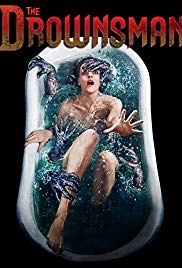 Storyline:
After almost drowning in a lake, Madison finds herself bound to a life of fear. Unable to describe what happened to her during the moments she was underwater, she begins to develop hydrophobia: an abnormal fear of water. Crippled by her post trauma, Madison attempts to shut out the world but her fear intensifies and she is faced with the vision of a dark figure that haunts her day and night. After watching her struggle for one year with the phobia and visions, Madison’s four friends attempt an unconventional intervention in which they accidentally open a floodgate to a dark place where none of them are safe. As Madison and her friends dive deeper into the dark history of this figure that haunts them, it reaches out and begins dragging them to a horrifying place that they can never come back from.
Written by
Anonymous
User Reviews: A bunch of young, attractive female friends are stalked and killed by a supernatural killer known as The Drownsman. Some similarities to Freddy Krueger. Both have creepy basements and are able to drag victims into their worlds. Both have back stories, though Freddy’s is far better. There’s not a drop of blood here, it’s pretty much watered down horror by today’s standards (pun intended), though viewers with a fear of water or drowning may get more if a thrill out of it. Average in every department, 5/10 from me.