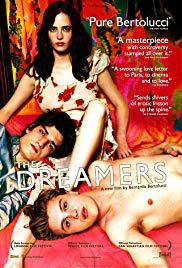 Storyline:
Paris, spring 1968. While most students take the lead in the May ‘revolution’, a French poet’s twin son Theo and daughter Isabelle enjoy the good life in his grand Paris home. As film buffs they meet and ‘adopt’ modest, conservatively educated Californian student Matthew. With their parents away for a month, they drag him into an orgy of indulgence of all senses, losing all of his and the last of their innocence. A sexual threesome shakes their rapport, yet only the outside reality will break it up.
Written by
KGF Vissers
User Reviews: “The Dreamers” is all about three young adult upscale hippy types who languish in a flat in Paris in the late 60’s and talk about cinema, politics, sex, and other stuff while sharing some first experiences. Two are brother (Garrel) and sister (Green) identical twins (or so we’re told) who have an almost metaphysical bond and the third is an interloper (Pitt) who falls in lust with the sister. There’s little plot to this slice of young adult life flick which seems to be more of a Bertolucci pet project than a commercial product for the masses. Less than engaging and much less than compelling, “The Dreamers” immerses itself in the esoterics of the place and time to the exclusion of anyone who wasn’t there then. Beautifully filmed and masterfully crafted with some young actors doing superb work under difficult circumstances with plenty of graphic nudity and sex, “The Dreamers” will play best with aficionados of French cinema, Bertolucci fans, etc. Those who are squeamish about sex/nudity should pass. All others, be prepared for a marginally interesting watch. (B)

Storyline:While the rest of his high school graduating class is heading to the same old grind of college, skateboarder Eric Rivers and his best friends, Dustin, a goal-oriented workaholic, and misfit slacker Matt have...

Storyline:"The Brookdale Institute" is a mysterious, little-known hospital for the criminally insane (a fact which is kept on a need-to know basis). Brookdale has another, more lucrative facet; a safe harbor for the c...