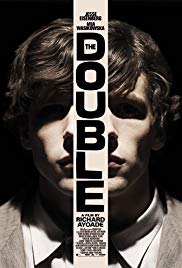 Storyline:
Simon is a timid man, scratching out an isolated existence in an indifferent world. He is overlooked at work, scorned by his mother, and ignored by the woman of his dreams. He feels powerless to change any of these things. The arrival of a new co-worker, James, serves to upset the balance. James is both Simons exact physical double and his opposite – confident, charismatic and good with women. To Simons horror, James slowly starts taking over his life.
Written by
StudioCanal
User Reviews: "Look at me, look at him. He stole my face."

I don’t know why this film didn’t engage me as it has most people, but there was just something about it and its characters that simply alienated me. The Double is Richard Ayoade’s follow up to Submarine, and it feels heavily influenced by other works, especially from directors like David Lynch and Terry Gilliam. It is actually an adaptation of an 1800’s novella written by Fyodor Dostoevsky, and Ayoade adapted it with a unique and clever style. There is a lot of dark humor involved and it also has a philosophical undertone. Despite being influenced by all these works, the film still feels unique and innovative, but it just didn’t resonate with me. I’m just not a big fan of these surreal films that don’t follow a classical narrative style, and The Double is just that, it plays out as a sort of nightmare for the main character played by Jesse Eisenberg. It’s a case where I felt the film was more about style and aesthetics than substance and content. I prefer Villeneuve’s Enemy, which is also a film dealing with a doppleganger premise, over this bleak film. There is no doubt that The Double is a creepy film, but one that didn’t work for me and one I don’t plan on revisiting because like the main character in The Double I felt completely alienated in this dystopian world.

The film introduces us to Simon (Jesse Eisenberg), a timid and shy young man who seems to live his life unperceived by everyone else. Simon always tries to please those around him and is very submissive despite everyone’s indifference towards him. He’s been working at a government agency for the past 7 years, and despite having some great ideas, no one ever pays attention to him. He is in love with one of his coworkers, Hannah (Mia Wasikowska), who he is too shy to speak to. He always looks for an excuse to visit her at the printing room, but he never finds the courage to ask her out. She is also kind of a lonely and strange girl herself, and Simon often finds himself watching her through a telescope from his apartment. Simon’s life turns around when one day his boss, Mr. Papadopoulos (Wallace Shawn), introduces a new coworker named James who is physically identical to him, but with a complete opposite personality. Everyone likes James, and no one even seems to notice he looks exactly like Simon because they don’t even conceive of his existence. James is so outgoing he has no trouble getting his boss’s attention and seducing women. James befriends Simon but ends up using his ideas to impress Mr. Papadopoulos and seduce Hannah. All of Simon’s dreams and hopes are shattered by James who is taking over everything he’s passionate about, but was always afraid to take a stand for.

The premise seems interesting, but the way it was presented is what didn’t work for me. Ayoade created such a unique dystopian and bleak world that it made me feel dull and alienated. I didn’t really care for the characters in this film, despite the wonderful dual performance from Jesse Eisenberg. He once again proves he’s a talented actor and carries this film. Mia Wasikowska is also wonderful and plays alongside Eisenberg really well. The performances were strong, I had no problem with them, but what I didn’t enjoy were the characters they were playing and the way the film was narrated. The film tries to explore our senses, but all it did for me was make me feel indifferent towards it the same way Simon’s coworkers felt towards him. It’s a quirky film with a lot of quirky sounds and musical score that just didn’t work for me the same way it did for most audiences.