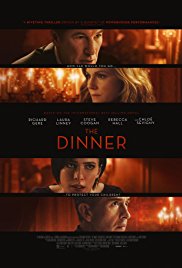 Storyline:
A former history teacher and his wife Claire meet at a fancy restaurant with his elder brother, a prominent politician and his wife Babette. The plan is to discuss over dinner how to handle a crime committed by their teenage sons. The violent act of the two boys had been filmed by a security camera and shown on TV, but, so far, they have not been identified. The parents have to decide on what to do.
Written by
AnonymousB
User Reviews: I have a friend who doesn’t like intense family dramas—too many bad associations. He’ll have to avoid The Dinner (the trailer gives too much away, BTW), written and directed by Oren Moverman. The movie is based on Dutch author Herman Koch’s excellent novel (2013), which I greatly admired. It’s told in the first person, and I wondered how the narrator’s snide and witty commentary would translate to the screen. That aspect of it worked differently in the book and survived less successfully in the film, with biting humor replaced by mental chaos. Steve Coogan plays Paul Lohman, an erstwhile high school history teacher who loathes (actually, is desperately jealous of) his politically successful older brother Stan (Richard Gere), now embarking on a gubernatorial campaign. The brothers and their wives (Laura Linney and Rebecca Hall) are to have dinner at an exclusive restaurant, but Paul at least is not looking forward to it. Nor should he be. Stan has an agenda. He wants to discuss something truly awful—criminal, in fact—their teenage sons have done, which could explode all their lives. Comparisons with Roman Polanski’s Carnage are perhaps inevitable, but the fireworks and the damage here are all in the family. The kids who caused the whole debacle are weakly portrayed, and the movie, unlike the novel, ends ambiguously. If your focus is on strong performances, this is a worthy effort. If you want a convincing story, read the book.