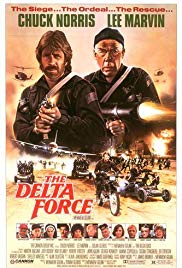 Storyline:
When the two terrorists Abdul Rafai and Mustafa hijack a Boeing 707 in Athens with 144 passengers and 8 crews, they use a grenade to force pilot Captain Roger Campbell to fly to Beirut, Lebanon, instead of to Rome and New York. Meanwhile the Delta Force commanded by Colonel Nick Alexander and Major Scott McCoy are assigned to resolve the situation. Abdul and Mustafa separate the Jewish and Marine passengers and they are transported to Beirut, while twelve other terrorists embark on board. Then they fly to Algiers, where the women and children are released. McCoy and the Delta Force team are prepared to attack the plane when Alexander learns that there are now fourteen terrorists on board and not only two, and he aborts the mission. Abdul kills a Marine and returns to Beirut with the male passengers on board. Now the Delta Force needs to act in two locations crowded of terrorists to release the hostages. Will they succeed?
Written by
Claudio Carvalho, Rio de Janeiro, Brazil
User Reviews: Sorry, that’s the best I could do to get Alan Silvestri’s theme across. I saw the last part of this movie many moons ago and one of the reasons I thought it was soooooooooo bad was that insipid theme playing over and over and over again. It’s a bright, peppy, we’re-number-one theme, so it hardly works for all the death and destruction, but I’m sure Silvestri, one of Hollywood’s most accomplished composers had nothing to do with this aural overkill; he composed a theme for one scene and the producers just kept placing the same theme EVERYWHERE in the movie where there’s Delta Force action.

So last night, Delta Force comes on. In the mood for a bad movie, honey? Sure, she says. At first I’m surprised. It’s not bad. In fact, it’s quite promising. Robert Forster as an Arab terrorist? Enough character actors to make a disaster flick? Kim Delaney as a nun? Hanna Schygulla as a stewardess? The acting was good, the plotting tight, and there was actually some genuine tension.

Then the Delta Force arrives.

And so does that unstoppable theme music. Ah, this is the part where the movie gets bad. I was right! My memory hadn’t been faulty. Phew. Open a window.

Poor Lee Marvin, looking tired, puffy, and letting his eyebrows do the acting in this, his last role. Norris isn’t a bad actor, but come on man, get a hair cut and a shave. The clichés are so painful, I wished they’d shot this without anyone doing any talking at all. And even the most patriotic, flag-waving guy or gal will cringe at how noble and heroic and elite and superior our boys are compared to the sniveling, savage, sneaky Arabs; at the height of the action the Arabs come off as though they studied terrorism with the Ritz Brothers.

The fight between Forster and Norris is perhaps the highlight, but ends stupidly (Mr. Forster’s terrorist is killed by a motorcycle-to-Mercedes missile, just like all the special forces use).