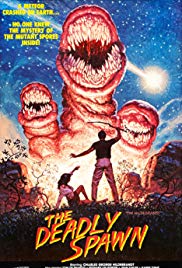 Storyline:
Two campers in the New Jersey woods have their outdoor fun interrupted by the arrival of a meteorite crashing nearby. They go to investigate the crater, but are suddenly attacked and devoured by alien parasites who have hitched a ride to Earth. After finishing off the campers, the hungry space monsters head for a nearby town, where they make their domain in the basement of an old house soon begin polishing off one hapless inhabitant after another. Four young teenagers, plus one pre-teen boy, try to find a way to stop the angry space monsters before they reproduce and literally eat humanity.
Written by
Jean-Marc Rocher <[email protected]>
User Reviews: I can’t be objective when I talk about horror movies or something similar… I’ve been a fan of b movies since I was 4. Personally I think that this is one of the best b movies I’ve ever seen. And everyone who likes that genre wont be disappointed. The rest of you, you who don’t like monster movies and gore, keep away from it and don’t kick a genre that you can’t stand or understand, you are who will be disappointed (some of you maybe still like it). The genre lovers don’t be afraid of it, you’ll really enjoy it. I promise you.

Storyline:Paris, 1910. Emile, a shy movie projectionist, and Raoul, a colourful inventor, find themselves embarked on the hunt for a monster terrorizing citizens. They join forces with Lucille, the big-hearted star of...

Storyline:A teenage girl whose inaction caused her mother's death arranges a similarly gruesome fate for her stepmother and brother.User Reviews:

Storyline:The world has begun to collapse. The rampaging Meicoomon absorbs Tailmon, who underwent a dark evolution, and changes form into the immensely powerful Ordinemon. In accordance with Yggdrasil's expectation, t...