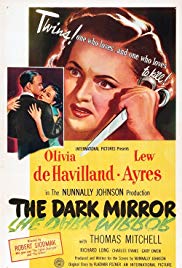 Storyline:
A woman suspected of murdering her doctor boyfriend has an identical twin sister. When both twins have an alibi for the night of the murder, a psychiatrist is called in to assist a detective in solving the case. Through a series of tests, he discovers which twin actually committed the crime and in the course of his investigation he falls in love with the normal twin.
Written by
Neil Doyle <[email protected]>
User Reviews: Those were the days.Every director had his Freudian movie during the glorious forties:Hitchcock had " spellbound",Lang "secret beyond the door" Tourneur "cat people"…. and Siodmak "the dark mirror".and it stood the test of time quite well ,almost as much as the three works I mention above.Of course ,the film owes a lot to Olivia de Havilland’s sensational rendition,well half a century before Jeremy Irons’ "dead ringers" or Keaton’s "multiplicity".We run the whole gamut, as Siodmak brought out all his equipment :inkblood test, lie detector,mirror,and the whole kit.But De Havilland’s charisma -at a time when actresses mastered their audience-survives and remains intact.We often feel ill-at-ease when we do not know who we’re watching anymore(she plays twin sisters who are suspects in a criminal affair).De Havilland was perfect when it came to portraying ambiguous women (see also "My cousin Rachel")

Robert Siodmak had an eventful career:after his debut in Germany,he made some works in France ("Pièges" (1939) is the best and deserves to be watched)then came to America where he made remarkable thrillers ("the spiral staircase";"the killers").His career ended in Europa with interesting -but difficult to see- movies about Nazism ,but the only one of those late movies we can see now is "Katia" (1959),pure schmaltz