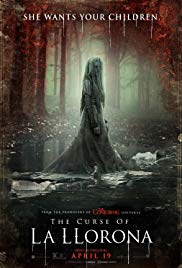 Storyline:
Ignoring the eerie warning of a troubled mother suspected of child endangerment, a social worker and her own small kids are soon drawn into a frightening supernatural realm. Their only hope to survive La Llorona’s deadly wrath may be a disillusioned priest and the mysticism he practices to keep evil at bay, on the fringes where fear and faith collide.
Written by
Warner Bros.
User Reviews: It’s definitely not as good as conjuring or annabelle. My expectations aren’t too high just based on the reviews we’re seen but overall it really wasn’t bad. There were several scenes really did create the atmosphere. In the end it’s another run-of-the-mill horror film despite having a great story !!