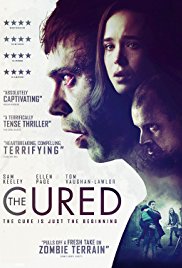 Storyline:
A disease that turns people into zombies has been cured. The once-infected zombies are discriminated against by society and their own families, which causes social issues to arise. This leads to militant government interference.
User Reviews: The Cured is the third Irish horror film I watched in 2018.
And, just like with The Lodgers, I had a blast with this movie!

Directorial debut of David Freyne, The Cured is set in a world were, after a zombie outbreak, 75% of the turned have been cured. While society is trying to go back to normality, welcoming back the so-called cured, scientists are trying to reverse the zombification process for the remaining 25% of infected. The audience follows Senan (Sam Keeley), a cured person who’s sent to live with his sister-in-low (Ellen Page) and her kid, as he struggles to deal with the 4 years he spent as an undead. Because, to make matters worse for the cured, they’re both welcomed with hostility by people and must deal with the vivid memories from the period when they were zombies.

This is a great concept for a movie, a concept that’s smartly developed by Mr Freyne: first and foremost, he decides to narrow down the story. Unlike the majority of zombie flicks, which show the whole world getting affected by the outbreak, here the story unfolds in a small Irish town, providing the film with a sense of authenticity and realism that is pretty much unprecedented in such movies.
Very calmly paced, bleak and featuring sort of "human" zombies, The Cured is exceptionally directed: without a doubt, this is the most evenly paced horror film of 2018 – so far – since it presents no dull moments nor sudden and inexplicable switches in tone and vibe.
Shot and edited in a somewhat minimalistic fashion – as in, photography and cinematography aren’t anything mind-blowing, but they perfectly fit the movie – Freyne’s first directorial effort flows seamlessly throughout the 90-minute-long runtime, becoming more and more down-on-earth as the time goes by. Without being pretentious or trying too hard, The Cured showcases an insane amount of competent shot compositions and framing, demonstrating how much effort was put into the project.

The same effort that each of the cast members surely put: Ellen Page and Sam Keeley are fantastic in the movie, displaying mesmerising performances that, at the beginning of the first act, reach a pinnacle with one of the most emotional confrontations I’ve seen in a while. Even the supporting cast, albeit rather one-note, do an outstanding job that fits their roles.
Although The Cured is foremost a drama, the horror elements seamlessly blend in, with a few scenes that stand out as very creepy and impactful. Being fully aware of the budget restraints, the filmmakers rarely went for berserk zombie actions… but when they did, it was loads of fun. Not mindless fun, though, since the audience got invested in the characters, therefore we experience with apprehension these action sequences.
A great, fitting grand finale perfectly wraps the movie up, leaving no room for major complaints.
Besides, The Cured might have more to tell than meets the eye – I personally, have an interpretation for the movie’s meaning that, albeit 100% spoiler-free, might affect your viewing experience, so feel free to skip the next paragraph.

THE CURED – MEANING EXPLAINED. Since the film is set in Ireland, my girlfriend and I figured it seems pretty obvious the story was a metaphor for the long-lasting civil war between Protestants and Catholics. In this scenario, the cured would represent Irish Catholics who are never really accepted as part of the society by the other religious group. Certain scenes in the movie (and other aspects I don’t want to spoil), which resemble more terrorist attacks than zombie actions, seem to back up this interpretation.

Oh, welcome back guys!
As per usual, I have a few minor complaints with The Cure: for instance, there are a couple of dialogue sequences that seemed very hasty, where the movie switches abruptly from two characters speaking to a completely unrelated scene. There are also one or two fake jump-scares just for the sake of it, I guess…

My biggest issue, which I’m sure bothers only me and 2/3 other viewers and won’t be a problem for most of you, revolves around the opening scene: a caption tell the audience everything we need to know about the film (which is what I used as plot description for this review). I, personally, would have preferred a subtler approach, where the viewer is introduced to the story without knowing anything and has to figure out, gradually, what’s going on. By doing so, the filmmakers would have enhanced the audience’s attention even more, building up a mystery the viewer would have loved to figure out.
I know, I’m a nit-picker! In fact, other than these very minute issues, I loved The Cured. I think most people are going to dig the movie as well, but I’m quite positive for some it would be too big of a departure from "traditional" zombie movies. Proceed with caution, and enjoy The Cured!

Check other reviews out at https://horrorworld.reviews/
The Cured 8.5/10

Storyline:When Alexia finds a business card for a wedding planner in her boyfriend Mathias's pocket, she assumes that he is planning a proposal and instantly says yes. However, the business card was actually for Mathi...

Storyline:Get to know the siblings whose films have captured the frenetic pulse of New York's city streets. An original documentary featuring footage from the making of their thriller GOOD TIME, along with several of ...

Storyline:Successful writer Anna James rents a remote farmhouse in England to begin work on the latest of a series of teen crime novels - The Emma Hart Mysteries. Initially, the setting seems perfect, but soon her idy...

Storyline:The film is an action packed and comedy filled movie about a ghost that is scared to go to heaven because he doesn't have a soulmate, so he convinces God to give him three days to fall in love. He is paired ...

Storyline:Three mountain bikers have a deadly encounter with some hunters on Blood Mountain.User Reviews: