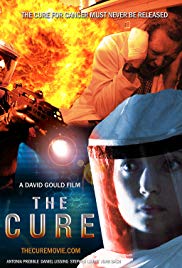 Storyline:
The film is about a young female researcher whose life is in danger when she discovers the pharmaceutical company she works for had developed a cure for cancer many years earlier. They haven’t released it because that would destroy their chemotherapy drug sales. She must now escape and release the cure to world while the company tries to stop her.
Written by
David Gould
User Reviews: I’m not a big conspiracy guy but The Cure deals with one that personally I think is very feasible. I’m referring to the cure for cancer existing but it being more profitable to treat than to cure.

The story is powerful and heart wrenching, made even more impactful by just how realistic the concept is.

I was really enjoying it but was saddened to see two things take place. One character bounces from being likeable to detestable every other scene like I’ve never experienced before.

Secondly the story becomes a bit far fetched, I’d have rather have seen a slow burning thriller without the need for guns and explosions. The front cover even shows it off to be exactly that, but it should have been so much more.

The Cure is a USA/NZ joint venture and a passable one at that, but it should have been better. If only they’d kept their feet on the ground.

Cast do a decent job

Gets a bit daft by the end

Not every movie need guns damnit