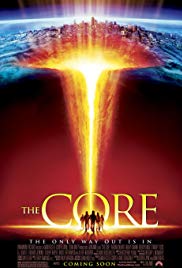 Storyline:
The Earth’s core has stopped spinning. Disasters are happening around the globe, including; animals acting in bizarre ways, monstrous thunderstorms. Dr. Josh Keyes and his crew of 5 go down to the centre to set off a nuclear device, hoping to make the core start spinning again, or humanity will cease.
Written by
Inhotenjoys
User Reviews: The core of the earth has stopped spinning, and its protective magnetic field is disappearing. The world starts to suffer from unusual disasters. The only people that could stop it is a disparate group of individuals who must travel to the center of the earth and set off some nuclear warheads.

It’s a good excuse to blow up all the world’s best places. The science is passable as these doomsday scenario goes. It’s not the worst sci-fi idea. This has some fun moments. They had fun blowing stuff up. The story moves along nicely. It’s fun even with DJ Qualls ‘hacking’ the earth. The CG is top notch. There isn’t anything wrong with that part. It’s a big budget treatment of a sci-fi B-movie concept.