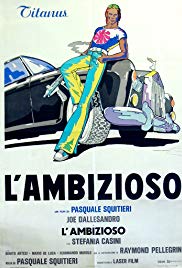 Storyline:
A young American in Italy who aspires to be a career criminal starts out working for a big gangster, but for some reason he gets beaten and banished from the gang. Determined to take revenge, he starts over and begins rising to the top.
User Reviews: Obscure Italian crime picture that has acquired some notoriety as the possible inspiration for De Palma’s ‘Scarface’ but more particularly for featuring the infamous and iconic Joe Dallesandro. He was in Italy for ‘Flesh for Frankenstien’ and ‘Blood for Dracula’ and this is not as good as either of those, nor, of course, his wild and influential ‘underground’ movies for Andy Warhol in the late 60s/early 70s. Here we have an ugly, though well shot, violent film as Joe tries to insinuate himself into the higher echelons of the crime syndicates of Naples and Rome. Its okay, if too long, but every now and again Joe is posed upon a bike, against a wall or laying down and these particularly well shot scenes are, I guess, what you might call the ‘money shots’. Decent soundtrack from Franco Campanino.