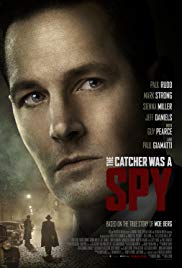 Storyline:
A major league baseball player, Moe Berg, lives a double life working for the Office of Strategic Services.
User Reviews: Ben Lewin has brought Nicholas Dawidoff 1994 biography about the mysterious Moe Berg.
And Moe Berg remained a mystery until he died.
Here’s food for thought: when you think of Jews in baseball Moe Berg’s name doesn’t easily come to mind. Hank Grrenberg, yes. Sandy Kofax, for sure. Not Moe Berg who played for the Boston Red Sox during the 20s and the 30s.
‘The Catcher was a Spy’ is a conventional film with a fascinating ‘hero’: a polyglot, a polymath, born of Eastern Europeans Jews who settled in Harlem.
And yet, Berg, played by a charming Paul Rudd who like his character celebrates tight lip secrecy.
It is to Rudd’s credit to have learned smatterings of six or seven languages to give body to his character who know many, many more.
Berg graduated summa laude from Princeton when few Jews could attend. A lawyer from Columbia law who passed the bar before he finished his degree.
Yet baseball was his life as was spying.
The script writers give short shift to the spy Berg when he went to Japan with an all-star team that included Babe Ruth. We get the idea Berg dresses up as a Japanese in full kimono, armed with a camera films from the roof of a hospital Tokyo Harbor which had a dual use as a military facility.
It would have taken too much to explain the prewar politics and the role of Japan invading Manchuria, testing America’s and European empires’ turf in Asia.
So, although Berg was acting on behalf of a rudimentary US spy agency, Lewin’s script white washes it as an act of a patriot.
There is a ‘love’ story, but beneath the surface the film there is a flaw, a ‘moral flaw’ for the time. Was Berg queer? Probably. A scene of a night visit to the waterfront frequented by men, and non reputable bars frequented soley by men.
Now to the film: Wild Bill Donovan, founder of the OSS, predecessor to the CIA, recruits Berg after Pearl Harbor. Donovan asks him if he’s queer. And without a beat, Rudd replies, ‘I know how to keep secrets’; to which Donovan replies, I don’t care wo a man f–ks, I’m only interested if he’s wants us to win the war’.
Berg’s assignment is to kill Werner Heisenberg, father of the German nuclear bomb. And here the film takes wings…and a high moment of the ‘Catcher was a Spy’ is when Rudd and Strong play mental chess, to fathom have the Germans the bomb.
And here we see Berg has a dialectical frame of mind, he’s willing to spare Heisenberg for an answer that Germany’s nuclear project is not very advanced. (Heisenberg is the object of an award winning play "Copenhagen’ that infers Heisenberg purposefully delayed Hitler’s plans for a nuclear weapon.)
The camera turns all over the place Japan, Italy, New York and Switzerland.
Long shots, close shots, it runs the full alphabet of film making.
Rudd speaks his languages fairly well with a good accent, but slips briefly when it comes to French.
There is nothing dramatically wrong, but the film never plumbs the secretive Moe Berg. At the end we are told Berg never married and spent time in libraries. And yet he never left the CIAin mind and spirit and died the loner he was.