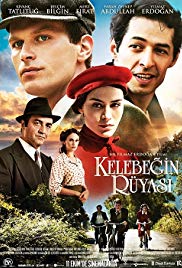 Storyline:
Last days of 1941 summer, the era of Obligation, during the famine atmosphere of the Second World War. In the middle of all this poverty and turmoil, there are two poets in their early twenties: Muzaffer Tayyip Uslu and Rustu Onur. They have been carrying tuberculosis germs in their lungs and love of poetry in their hearts for years. Two poets who have the constant habit of making bets on things that they do not own, make a bet on a beautiful girl. They will both write a poem for her and whichever Suzan likes, the other will fade from the scene..
Written by
Anonymous
User Reviews: Kelebegin Ruyasi centers around the real life journeys and hardships endured by poets Muzaffer Tayyip Uslu and Rustu Onur. Staged to the backdrop of 1940s Turkey and at Zonguldak (a city still known best for its coal mine tragedies) the two young poets try to survive and create in an environment where even writing paper is scarce. Full of life and love for poetry Onur and Muzaffer live a poor but content life: both work for the government, one as a blue color worker in an office the other as an officer at the coal mines… The seemingly happy life change with the entrance of a Suzan Olsoy, a government high official’s daughter involved in sports and better represented here with her beauty. Muzaffer and Onur both suffer from tuberculosis and love (love for poetry and romantic other). Their illness and love see them moving to Heybeliada (a medical center) and then to 1940s Istanbul…

With every Turkish movie released in theaters it has become a common place act to talk up the movie, often to the heights of ‘one of the best movies ever made’. This was the case with the last Yılmaz Erdogan movie I watched (Neseli Hayat)… I often leave the theater feeling I have been lied to. Because often these movies turn out to be mediocre if not well below mediocre. But thank god this was not the case here! On that note let me make my last point first: Kelebegin Ruyasi is the only other good movie made by Yilmaz Erdogan since Vizyontele. This movie needs to be watched and watched carefully too! Second yet foremost, the DOP and Art Directors have done a magnificent job, to the degree and effect of best similar works in world cinema. The picture has a great quality reminiscent of works of Guiseppe Tornatore: the visuals have added tremendously to the storytelling and the reality through which the era is captured makes the movie more grounded. The cinematography alone is a great reason to watch the movie.

On the acting side the movie gives four great performances and the rest is but preconceived if not below average. Kivanc Tatlitug, a model turned actor has really outdid himself. He has the subtle approach of a seasoned actor and though his nail-biting is seen at first as a ‘character kitsch’ the audience soon gets over it and enjoys the tour-De-force that this Kivanc. He has brought Muzaffer to life without any unnecessary arabesque pitfalls. Second actor worth noting is Yilmaz Erdogan himself. His portrayal of Behcet Necatigil is unmistakably to the point: the tired looks, the hope that survives in his eyes, the limited motioned acting technique, the gentleness of the voice of a poet. I tend to dislike even the idea of a ‘actor-director’ but Mr Erdogan pulls it off very well, and by casting himself (also a good poet) as a seasoned poet and giving himself very limited time on screen he reminds the audience that this is ‘their story’ not ‘his’! A very valuable take that he has missed and hence done wrong with in his previous movies (again, all his filmography but Vizyontele falls under this)… Next Ms. Farah Zeynep Abdullah! Her presence on the screen makes the audience happy every time her gentle yet tranquil face appears. Just like Mr. Tatlitug she too has portrayed a terminally ill person beautifully without a slight nuance of overacting. Lastly though he appears briefly Taner Birsel gives a great performance as Muzaffer’s father.

On that latter name: casting Belcim Bilgim (30 years old) as a high-school student was purely ABSURD if not BAFFLING. Yes she is actor-director Mr Erdogan’s wife and most likely this is the reason she got the part but more than the movie this choice of cast has and will effect her negatively: Belcim Erdogan is a good actress with potential to become a great screen persona but such acts of being cast as a 16-17 year old can and will only hurt her perception: to the degree that every time she showed up with a school uniform half of the people at the cinema laughed out loud! If the rest of the movie was not so good, her unnecessary and absurd choice of lead actress could be enough to destroy the movie!

The script is above average, with great dialogs yet bad character development! The latter is the reason for the movie’s half an hour extra long duration: we keep seeing the struggle and the love for poetry through first half of the movie that could be cut down with better ‘showing’ and less ‘telling’. Mr Erdogan who comes from a theater background masterfully writes dialogs but when it comes to storytelling with a film medium he proves not to be that much in control of the apparatus, specially scripting techniques. Hence the movie keeps going into repetitions (Susan-Muzaffer scenes) and worst it looses its dramatic build up where the last half an hour rushes to tie all the stories and bring it to closure. I was little saddened by the fact that this story was so linear! when the lives and works of these poets were so none-linear! I mean this guys were poets of Garip Akimi, they revolt against traditional poetry yet their lives has been captured as a linear story? But that’s beside the point!

Lastly editing: with such great cast and crew this movie definitely needed a better editor! One who knows how ‘not’ to cut the flow of the picture and feelings abruptly.

All in all this is a great achievement for Turkish cinema and ALL must go and see it because it is pointing to the right direction where cinema needs to go and takes a few solid steps at the same time.

Storyline:Jack is the high school football hero. He couldn't care less when Claire, a girl he didn't know, is struck and killed by a drunk driver. But when Jack discovers a photo of Claire where she is staring directl...

Storyline:During a recent remodel of The Yellow House crews discovered the remains of a little girl and a super 8 movie camera with the footage still inside. The footage has been released to the media by Summerland po...

Storyline:A romantic story of two strangers who come across each other on a journey from Ankara to Izmir.User Reviews:

Storyline:Miyo Sasaki is a weird second-year junior high student, who falls in love with her classmate Kento Hinode. Muge tries to make Kento notice her every day, but all in vain. Nevertheless, while carrying a secre...

Storyline:Ryder and Julina have just fallen madly in love. But this passionate romance is forbidden--it goes against the laws of their polygamous community. Things only get more complicated when Ryder's father declare...