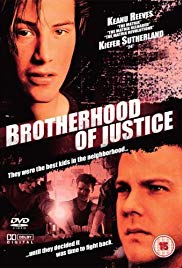 The Brotherhood of Justice (TV Movie 1986)

Storyline:
A group of high school students, led by a rich boy Derek, is sick of school violence and decides to become underground vigilantes named “Brotherhood of Justice”. It starts with the idea of “watching people”, but things quickly get out of control. “Brotherhood of Justice” turns out to be another gang of violence. Derek wants to stop it but it is too late, so he takes responsibility for it and gives himself to the law.
Written by
Liz Chen <[email protected]>
User Reviews: When vandals damage the Santa Lucia High School, the principal Bob Grootemat (Joe Spano) joins the classes and presents a lecture to the students about the problems with vandals, drug dealers and other bad elements. Six friends – the students and football players Derek (Keanu Reeves), Scottie (Darren Dalton), Mule (Evan Mirand), Collin (Don Michael Paul), Barnwell (Gary Riley) and Les (Billy Zane) – decide to form a group of vigilantes to punish the delinquents and they call themselves "The Brotherhood of Justice". But the problem is when they decide to use their power for personal issues with other mates and lose control.

"The Brotherhood of Justice" is a film based on true event, with a story of a group of vigilante teenagers. The cast has many names of actors in the beginning of career and it is worthwhile watching to see them in their early work. The conclusion could have been better developed. My vote is six.

Title (Brazil): "A irmandade da Justiça" ("The Brotherhood of Justice")

Storyline:In the 50s, the complicated life of a popular writer who must share his life with his family, his numerous mistresses and his work. Adapted from autobiographical story by Kazuo Dan, who published it a few mo...