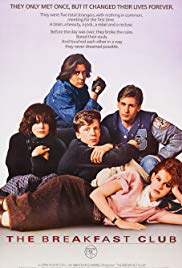 Storyline:
Beyond being in the same class at Shermer High School in Shermer, Illinois, Claire Standish, Andrew Clark, John Bender, Brian Johnson and Allison Reynolds have little in common, and with the exception of Claire and Andrew, do not associate with each other in school. In the simplest and in their own terms, Claire is a princess, Andrew an athlete, John a criminal, Brian a brain, and Allison a basket case. But one other thing they do have in common is a nine hour detention in the school library together on Saturday, March 24, 1984, under the direction of Mr. Vernon, supervising from his office across the hall. Each is required to write a minimum one thousand word essay during that time about who they think they are. At the beginning of those nine hours, each, if they were indeed planning on writing that essay, would probably write something close to what the world sees of them, and what they have been brainwashed into believing of themselves. But based on their adventures during that …
Written by
Huggo
User Reviews: This movie is one of the best, if not THE best, 80’s film there is. The fact is, every teen character in this movie can be related to someone we knew in high-school. As a child of the 80’s, I can honestly say that this is a representative cross-section of every high school in North America. The geek, the jock, the outcast, the rich pretty-girl snob, and the future criminal. They all exist, to some degree or another, in the classrooms of every high school on the continent.

What makes this film rise above the rest is the character development. Every character in this film is three-dimensional. They all change, in one way or another, by the end of the film. Whether or not things remain the way they are long after this film ends is unknown, and that adds to the rama. The most important scene in this film is when the characters, as a group, all open up to one-another and describe the hell that their daily school routines are in a personal fashion. Nobody likes the role they must inevitably portray in the high-school scene, but the fact is, it is often inescapable. This film gives the viewer some insight into how the other people around them might have felt during that particular time in their lives.

Each of the main characters in this film shines, but Judd Nelson (John Bender) and Emilio Estevez (Andrew Clark) rise above the rest. Simply put, these two actors each put their heart and soul into their respective characters, and it shows.

At the end of the film, the viewer is left to make their own conclusions as to how things will carry forth. And I’m sure that most people will do that. This is one movie that left me feeling both happy and sad for each of the characters, and it isn’t easy to make me care about a film in that way. Even if you aren’t a fan of the 80’s genre, this isn’t one you would want to miss.