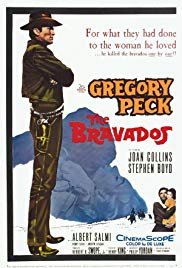 Storyline:
Jim Douglas has been relentlessly pursuing the four outlaws who murdered his wife, but finds them in jail about to be hanged. While he waits to witness their execution, they escape; and the townspeople enlist Douglas’ aid to recapture them.
Written by
David Levene <[email protected]>
User Reviews: After almost 50 years of first watching "The Bravados", I could not help thinking this time that this is a Catholic western. When I saw it as a kid, while studying at a Catholic school ruled by Augustine priests, I enjoyed it very much, maybe because it was a reflection of what we were taught in classrooms, as opposed to what we saw in the real world. I enjoyed the film today as much as I did the first time, although then I was unaware of a few realistic contradictory and intriguing elements of the story: the whole population of Río Arriba (except the sheriff, a hangman and four outlaws) attends piously to mass (at night?), as a sort of preliminary rite before hanging the outlaws, but turns, in seconds, into an angry mob; Joan Collins asks Gregory Peck to go into the church and have a talk with a "certain lady" (Virgin Mary), and then begs him to "kill, kill, kill" the outlaws (in a poorly staged dramatic moment, showing her limited acting range); or the priest tells Peck, after a little preaching, that people "think that prayer helps"… not him. On the other hand, it has moments of true honesty, as when Peck confesses his guilt to the priest, or the compassionate way the Mexican outlaw Luján treats Peck in his home. This makes the film more fascinating, while one follows Peck in an obsessive hunt for the four men who raped and killed his wife. Henry Silva shines as Luján, giving perhaps the finest performance in the film  one already knows Peck’s style, so Silva stands out as a fresh face, and an original performer in his interpretation of the Mexican thief. It seems Henry King was aware of Silva’s talent and features, because he only gives us close-ups of Silva and Stephen Boyd, when Peck visits the outlaws in jail. The movie was shot in México, and most of the times King portrays the Mexican characters as real human beings, especially the women: Luján’s wife, played by Alicia del Lago, one of the stars of the Mexican classic "Raíces"; the talkative peasant showing Peck the way to San Cristóbal, very convincing in her descriptions, if you know Spanish; or Parral’s mother, seen in a brief appearance played by a then young Ada Carrasco, who put the finishing touch to her career as Nacha, the old Indian passing the recipes of her gastronomic delights to the heroine of Laura Esquivel’s "Como agua para chocolate (Like Water for Chocolate.)" A very good film.