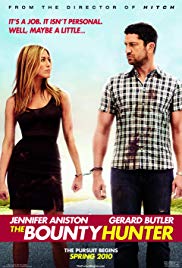 Storyline:
Milo Boyd, a down-on-his-luck bounty hunter, gets his dream job when he is assigned to track down his bail-jumping ex-wife, reporter Nicole Hurly. He thinks all that’s ahead is an easy payday, but when Nicole gives him the slip so she can chase a lead on a murder cover-up, Milo realizes that nothing ever goes simply with him and Nicole. The exes continually one-up each other – until they find themselves on the run for their lives. They thought their promise to love, honor and obey was tough – staying alive is going to be a whole lot tougher.
Written by
Sony Pictures
User Reviews: Andy Tennant’s movies have been hit and miss. He directed Anna and the King and Hitch, but also Fool’s Gold and this. He should have a better hand at choosing his scripts by now cause this one is a mess.

It’s a hybrid of romantic comedy and action movie. It fails in both categories. The characters are one dimensional and under developed. If it weren’t for Butler’s natural charm I would’ve ended up hating his character, a drunken gambler who got thrown out of the police force. The action is cliché for the small amount of time it graces us with its presence, and most of the humor falls flat, maybe because you’ve already seen/heard the jokes before, from other, better movies.

For all their likability, both Gerard Butler and Jennifer Aniston seem to be on auto pilot. Gerard is his own charming persona and Aniston is, well, Rachel from Friends, though they exhibit some chemistry. Neither will benefit from starring in this movie. Side note: Christine Baranski is wasted in a role far beneath her talent.

That’s not to say this is a bad movie. It has some fun moments, though familiar, and it will not seem a total waste of time. On the other hand it isn’t a particularly good movie and you will forget about it as soon as it is over.