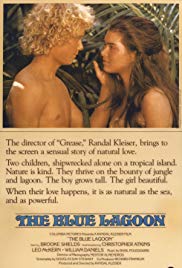 Storyline:
On a journey to San Francisco, Richard, his father and cousin Emmeline find themselves on a ship about to explode. Rushed to a lifeboat with Paddy Button, the two children escape while their father (and uncle) are on another lifeboat. In the chaos following, the lifeboats are separated. Paddy, Richard and Emmeline find themselves with no food and no water stuck in the middle of nowhere. After some time, the three come across an uncharted paradise, where Paddy quickly teaches the children fishing, hunting and building. After maybe a month or two, Paddy gets very drunk off a barrel of rum found on the island when they first arrive, and drowns in the middle of the night. Emmeline and Richard, now alone and very scared, move location and rebuild their island home. Many years later, the two young teenagers have developed a very real home, but hormones and feelings between the two strain their friendship, until Richard, who is still very determined to reach San Francisco, is let down by …
Written by
Bree Pearson
User Reviews: This is one of my favorite movies. It is a raw and natural love story that is beautiful. Brooke Shields is beautiful through the whole movie. Chris Atkins was good too, but his lines were kind of silly. Anyways, I highly recommend this movie, but not for children since there is plenty of nudity throughout the film.