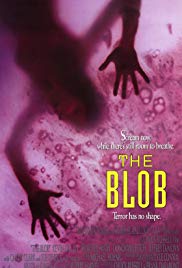 Storyline:
Meg Penny is a cheerleader out on her first date with one of the football players, Paul Taylor. It doesn’t go very well. Before they get where they’re going, an old vagrant runs out in front of Paul’s car, screaming in terror. The old man is closely followed by Brian Flagg, the local teen rebel, complete with long hair, black leather jacket, motorcycle and tough-guy attitude. Paul blames Brian for chasing the old man, but after the threesome takes him to the doctor’s office, it becomes clear the vagrant had more to worry about than some young tough. He was screaming because of the acid-like substance on his hand – a substance that spreads over his body and eventually consumes him. Soon, the growing red blob, which sprouts tentacles to attack its victims, becomes a menace to the small town of Arbeville, Colorado. The military soon arrives in Hazmat suits, led by the wide-eyed Dr. Christopher Meddows. They’re from the government, they say, and they want to help; but Brian’s distrust for…
Written by
J. Spurlin
User Reviews: Usually, when they attempt a remake of a classic sci-fi/horror flick, they bungle it beyond redemption. "The Blob" is actually a pretty good remake, elaborating the original’s story. In this case, the protagonist – aside from the title character – is punk Brian Flagg (Kevin Dillon). The movie’s strength comes from the intrigue that it portrays.

Needless to say, now that the censorship laws had eased, they were able to add in some more things. I’ll never forget the sink scene (as I call it). And, as I understand it, Donovan starred in this movie (or was it someone else with the name Donovan Leitch?). Oh well, the point is that they eked out a good movie with this remake.