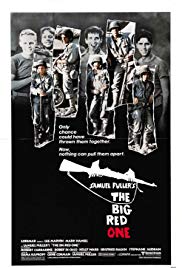 Storyline:
The story of a hardened army sergeant and four of his men, from their first fight at the Kasserine Pass after the invasion of North Africa through to the invasion of Sicily, D-Day, the Ardennes forest and the liberation of a concentration camp at the end of the war. As the five of them fight – and survive to fight yet again in the next battle – new recruits joining the squad are swatted down by the enemy on a regular basis. The four privates are naturally reluctant to get to know any of the new recruits joining the squad, who become just a series of nameless faces.
Written by
garykmcd
User Reviews: This is an under-appreciated war film. You never see it on TV, I know of no widescreen version available on video, and no one talks about it in books, newspapers or on television, but it is worth renting. Made up of a number of short vignettes, the main characters experience everything from delivering a baby (in a tank!) to D-Day on Omaha Beach to liberating a death camp as they fight their way through Africa, Sicily, and Western Europe. I understand that it is semi-autobiographical, and boy, does it pack a wallop. From the opening scene to history repeating (almost) itself at the end, it is well-crafted, says a lot and leaves the viewer changed. When the voice-over at the end says that the only glory in war is surviving, you KNOW why. Watch in particular for how Lee Marvin leads his squad, in particular when he gives an extra clip of M-1 ammunition to one of his soldiers at the Death Camp to help the soldier process, in a unique way, the horror of what they have discovered. It is unforgettable.