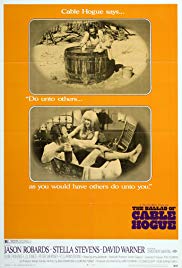 Storyline:
Double-crossed and left without water in the desert, Cable Hogue is saved when he finds a spring. It is in just the right spot for a much needed rest stop on the local stagecoach line, and Hogue uses this to his advantage. He builds a house and makes money off the stagecoach passengers. Hildy, a sex worker from the nearest town, moves in with him. Hogue has everything going his way until the advent of the automobile ends the era of the stagecoach.
Written by
John Oswalt <[email protected]>
User Reviews: There was always far more to Sam Peckinpah than just bullets, bloodbaths, and squibs. "Bloody Sam", as he was so often called, was also a mercurial and complicated director who could quite easily master the fine art of congenial character studies as he could the dark and violent side of Man. Case in point is his 1970 western THE BALLAD OF CABLE HOGUE. Alongside his 1972 contemporary western JUNIOR BONNER, BALLAD is Peckinpah at his most relaxed, as well as his most overtly comic. Due to typical studio finagling, BALLAD was far from a hit when it was released in May 1970; but it has since then attained a better place in the western pantheon.

Jason Robards stars in the title role, a desert rat left to fend for himself after his two unscrupulous partners (the always-reliable Strother Martin and L.Q. Jones) abandon him without any water out on the Nevada desert. Vowing revenge one day against them, he stumbles through the desert for several days; and just when he’s near the end of his rope, in the middle of a sandstorm, he comes upon water–in a place it isn’t supposed to be. The waterhole becomes his salvation, and eventually a money-making enterprise, being situated along a heavily traveled stagecoach route. Into his life come a sex-starved preacher (David Warner) and a small-town prostitute (Stella Stevens) bound for New Orleans. And yet, for all the companionship they provide and all the money he gets from the water, he still can’t stop thinking about getting even with Martin and Jones–a fact that eats at him and makes him vindictive, even towards Stevens and Warner.

Stuck as it was between THE WILD BUNCH and STRAW DOGS in the Peckinpah film canon, THE BALLAD OF CABLE HOGUE was largely considered by some to be a minor film, seeing as how it had next to no violence to speak of (which makes the ‘R’ rating it has a bit much today–‘PG-13’ would be more like it). But it showed that Peckinpah cared as much for characters as he did for content, a fact that holds true for all of his best movies but which so often got set aside because so many critics focused on the violence. The musical interludes don’t necessarily catch on very well, but they are the only (minor) flaw to this congenial mix of comedy and drama in a sagebrush setting. Robards does his usual good job as the grizzled desert rat; Stevens scores as the love he really can’t have; and Warner’s performance as the lecherous preacher Joshua is incredible. Other Peckinpah regulars like R.G. Armstrong and Slim Pickens provide the usual great support; and the period score by Jerry Goldsmith, and Lucien Ballard’s fine cinematography top things off.

THE BALLAD OF CABLE HOGUE is a film in need of revival, both for Peckinpah cultists in particular and indeed Western film fans in general. It proved that even a troublesome Hollywood infant terrible like Sam Peckinpah could be congenial when given the right material.