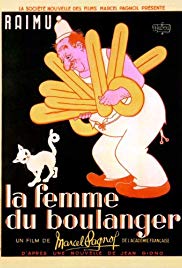 Storyline:
In this little Provencal village, a new baker, Aimable, settles down. His wife Aurelie is beautiful and much younger than he. She departs with a shepherd the night after Aimable produces his first breads. Aimable is so afflicted that he can not work anymore. Therefore, the villagers, who initially laughed at his cuckoldry, take the matter very seriously (they want the bread) and organize a plan to find Aurelie and to bring her back to the bakery.
Written by
Yepok
User Reviews: I really liked this movie a lot–especially because it had such a great ensemble cast. This movie was absolutely stuffed to the brim with characters from this community to give the movie great life and charm. In particular, the acting by Raimu as the baker was dynamite. He is a one-namer (like "Cher") that looks like a slightly skinnier Oliver Hardy and manages to use a wide variety of facial expressions and body language to convey so much emotion. When his heart is broken by his philandering wife, you really find yourself feeling for the guy! Overall, it was extremely well-acted and well-written and I strongly recommend it. However, be forewarned that the videotape by Interama Video Classics is VERY poor quality AND they use white subtitles that are often very hard to read. I don’t know why, but almost EVERY French film from the 1930s I have tried to watch on video is almost unwatchable due to the degradation of the print. I’m not sure why this is, but it could easily turn people away from classics like this movie, and that would be quite a loss, as Marcel Pagnol who wrote this film was a true artist and master of his medium.

Storyline:With aerial footage from fifty-four countries, 'Home' is a depiction of how Earth's problems are all interlinked.User Reviews: First of all I am relieved that a movie on this subject has been produced with s...

Storyline:1798. In a forest, some countrymen catch a wild child who can not walk, speak, read nor write. Doctor Itard is interested by the child, and starts to educate him. Everybody thinks he will fail, but with a lo...

Storyline:In the contest of the "most virgin" Miss Monde 1984, Miss Canada wins, and prize is the marriage with the milk industry tycoon with his fifty billion dollars fortune. In their honeymoon, Miss Canada "does no...

Storyline:Three men, three women, opposites, possibilities, and tastes. Castella owns a industrial steel barrel plant in Rouen; Bruno is his flute-playing driver, Franck is his temporary bodyguard while he negotiates ...