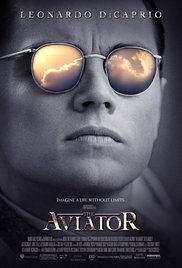 Storyline:
Biopic of billionaire Howard Hughes, starting with his early filmmaking years as owner of RKO studios but mostly focusing on his role in designing and promoting new aircraft. Hughes was a risk-taker spending several fortunes on designing experimental aircraft and eventually founding TWA as a rival to Pan AM airlines owned by his great rival Juan Trippe. When Trippe’s politico Senator Ralph Owen Brewster accuses Hughes of being a war profiteer, it’s Hughes who gains the upper hand. Hughes also had many women in his life including a long relationship with actress Katharine Hepburn. From an early age however, Hughes was also germophobic and would have severe bouts of mental illness.
Written by
garykmcd
User Reviews: Leonardo DiCaprio is one of the best actors of his generation. Martin Scorsese is the greatest director of all time. They have made a formidable pair over the years and sometimes I think DiCaprio is miscast for certain roles ("Gangs of New York," "The Departed"), but "The Aviator" has DiCaprio’s name all over it. This is one of the best, if not thee best, acting performances I have seen since Robert De Niro in "Raging Bull." Both characters have their similarities as well. Jake La Motta had his own inner demons which lead to his paranoia about his wife which ultimately lead to the destruction of the people around him and Howard Hughes’ demons are brought front and center as we see where it all starts when he’s given a bath at an age where the young Howard should be more than capable to cleaning himself. His mother tells him about all the diseases and makes him spell the word "quarantine." In this unsettling opening scene we see where his delusions start.

There are some very good scenes with Cate Blanchett, who plays Katharine Hepburn, and quite wonderfully I might add, and by wonderfully I mean terribly annoying, loud, and excessive. The damn woman does not shut up. Howard says, "I could always hear you." She replies, "That’s ’cause I’m so Goddamn loud." Yes you are miss Hepburn, yes you are. They have some great scenes together, but the best one comes when Howard meets her entire family and it’s quite possibly the greatest dinner sequence I have ever seen. It’s beautifully shot as we watch Howard Hughes struggle to keep up with all the conversations going on at the same time due to his deafness. They are extremely rude people and they bully him and then he finally snaps and we feel so good for him. Katherine Hepburn is a completely different person with her family than alone with Howard. Howard accuses her of acting in her real life and wonders if she even knows anymore. This leads to the destruction of their relationship and leads to more paranoia from Howard Hughes as he burns all the cloths that she had infected. He calls Noah Dietrich (John C. Reilly) to tell him to buy him some cloths and then quickly changes the conversation and starts asking him about recorders and asks if he’s recording his conversation. This is where Howard Hughes and his paranoia starts to take off.

The best part of the film comes in the third act, during a simple and what some may think as a rather uneventful Congressional Hearing. It’s two people cross examining each other, what could be so great about that? You would have to see to understand it. Alan Alda is the villain as Senator, Ralph Brewster, who is trying to pass a CAB Bill through the Senate that will put a monopoly on the air ways giving Pan Am sole possession of the sky. Juan Trippe (Alec Baldwin) had his people create the bill on their behalf to shut out the competition from Hughes’ growing airway company- Trans World America- which is expanding across the Atlantic Ocean into Europe. Brewster and Trippe team up to investigate Hughes as they try to embarrass him in public by revealing all his secrets. They order the FBI to raid Hughes’ house over and over again causing Howard Hughes to shut himself off from outsiders like nothing you have ever seen before. They threaten to take Hughes down by investigating what he did with the 50 million he received from the government to build plans that ultimately didn’t fly during the war. Howard Hughes can simply sell over Trans World America to Juan Trippe and everything will be forgotten to hide him of the public embarrassment. Alda is spectacular and so crafty, always looking for a way to the top, or always getting his way with a smile on his face, just rubbing his arrogance in the face of everybody. During the Congressional Hearings the film reaches it’s climax. This is where Hughes tries to overcome his extremely paranoid state and go to these Congressional Hearings and fight for his reputation. The battle that ensues between Alda and DiCaprio is incredible to watch. The final sequences brings us triumph. Only then are we brought right back down as we see Howard Hughes has not progressed in the final scene. It’s a brutal ending it the subtlest of ways. The fact that we seen him at the Congressional Hearings gave us hope that he can somehow recover from his paranoid state; that he conquered his fear. Then, we are shot right back down with the final moments of the film capping off an incredible roller-coaster ride of emotions. The final act of the film is what I thought would undoubtedly give Leonardo DiCaprio his first Oscar, but to my surprise that didn’t happen and that’s a shame because he is absolutely incredible here. A fan of his or not, you can’t deny his greatness in "The Aviator."

One of Scorsese’ best.

Storyline:Luisa is a 20-year-old law student from Mannheim, Germany. As the political right rises in popularity, Luisa joins Antifa, through her friend Batte. She starts to live in a commune, where she meets Alfa and ...

Storyline:How intelligent is artificial intelligence? Should we welcome it or fear it? Might it help humanity with its problems? And if so, to what extent? This documentary pursues these questions, while providing inf...

Storyline:Dawn recently lost her husband and experiences growing anxiety as her daughter Melanie plans to move away for college. An argument with a hostile new neighbor aggravates Dawn's mental condition, and she begi...

Storyline:In Wittelbacherpalais, Munich's prison and Gestapo center, middle-aged Else Gebel awaits trial for carrying anti-Nazi material. She serves as a clerk in the Gestapo office. On Thursday, 18 February 1943, two...

Storyline:Michael has everything under control: a successful military career, a beautiful wife and two daughters. His younger brother Jannik is a drifter, living on the edge of the law. When Michael is sent to Afghani...