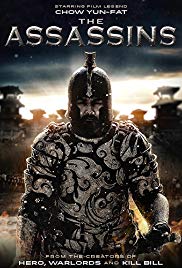 Storyline:
Set in the Three Kingdoms period of Chinese history, the story focuses on Cao Cao in his old age, exploring the areas of military tactics, love, and the relationship between father and son.
User Reviews: This is a beautifully produced movie both from the story, and production stand point. A production that’s second only to the "Red Cliff" which is another story that puts Cao Cao at the focus of the story. China’s production of historic movies in recent years are very high quality, and this movie is no exception.

This is an unusual story that explores the inner life of Cao Cao, the main antagonist in the first half of the story of "Romance of the Three Kingdoms". Why is it unusual ? It’s because although many stories about Cao Cao as a tactician has been mentioned, hardly any mention of his private life has been written. This is the first story I’ve ever seen that attempts to shed light on the private life of one of the greatest tactician China has ever produced (perhaps only second to Kon Min), who’ve conquered Northern China with his military might, and posthumously been promoted to the rank of an emperor after his sons usurped the Han dynasty.

The story of course is fictional, but the weight of the character Cao Cao makes this an interesting story. For a long time I’m sure many people have wondered what would Cao Cao have done in this situation, and that situation. The movie takes an artistic license to showcase his actions in many different situations that in some ways answers to the age long questions people had about Cao Cao. What is intriguing about Cao Cao in the Romance of the Three Kingdoms, is that he has style even as a villain, and also shows romantic side, not to women, but in the way he writes poems, makes decisions, and regrets few things he’s done. A shadow of his such personality is shown in this movie,

Yifei Liu plays the part of the assassin who’s mother is hinted to be one of the four great beauties in Chinese history Diaochan (貂蝉).

Perhaps one movie is too small of a space to tell the story of Cao Cao, and although this is a very good movie, it still leaves a huge blank area that’s not covered about one of the best and the worst hero China has ever produced. Yifei Liu has matured enough as an actor to play the romantic partner of Chow Yun Fat. She did a really convincing act in her role. Although incomplete, the movie deserves an A+ for its effort to put Cao Cao on the big screen.

Storyline:Life is tough in a big city. Especially for a young Taiwanese photocopy clerk, whose recent breakup haunts him day in and day out. But like all urban romance he soon meets the eccentric manic pixie of his dr...