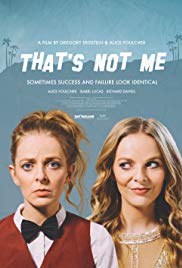 Storyline:
Polly’s dreams of making it as an actor are shattered when her twin sister catapults to international stardom. Scrambling to catch up – Polly juggles woeful auditions, painfully awkward dates and her underwhelming job at the local cinema.
User Reviews: This film is Gregory Erdstein’s first full length feature film (10 previous credits for short films) as director, producer and co-writer alongside Alice Foulcher who was also the lead.

It’s a cute film directed fairly decent, but with a sloppy story that really had no point to it, and was certainly not a comedy (I did not laugh once).

It’s clearly a low budget Aussie flick that made a decent attempt to tell a story, but failed so in the screenplay. In the beginning, it was hard to tell which twin was in certain scenes. Although the story was based on the struggles of one of the twins chasing her acting career and riding the coattails of her sister, at the end of the film you are left saying "that’s it? so what?". There was no point to this film.

The acting was however fairly decent, the score a little too obvious in certain scenes, and the editing could have been tighter. This film missed the mark in telling the story better. Certainly not 10/10 material the other two fake reviewers posted, of which are clearly a spoiler plot summary. Would I recommend it or see it again? Nope. It’s a very generous 6/10 from me only because it’s a low budget indie Aussie flick and for its "cuteness" factor.

Storyline:Seen only by kids, the Fixies are tiny creatures who mend broken appliances, gadgets and electrical circuits. When one of the Fixies gets a hold of special bracelets that transform him into a super-powered r...

Storyline:Laura and Carlos love each other as if every day is their last. Driven by the desire to control her own life and break free from her mother's control, Laura dreams of getting pregnant. Both search for their ...

Nobody Sleeps in the Woods Tonight (2020)

Storyline:A group of technology-dependent teenagers goes to - offline camp. Common hiking in the woods without access to smartphones will not end, however, as planned by the organizers. They will have to fight for rea...

Storyline:A young couple on a romantic weekend in the Australian bush are terrorised by a psychopathic family.User Reviews: Nothing good to say about this one. Low budget, script, actors an special effects bought at W...