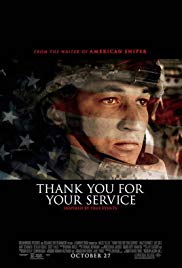 Storyline:
DreamWorks Pictures’ Thank You for Your Service follows a group of U.S. soldiers returning from Iraq who struggle to integrate back into family and civilian life, while living with the memory of a war that threatens to destroy them long after they’ve left the battlefield. Starring an ensemble cast led by Miles Teller, Haley Bennett, Joe Cole, Amy Schumer, Beulah Koale, Scott Haze, Keisha Castle-Hughes, Brad Beyer, Omar J. Dorsey and Jayson Warner Smith, the drama is based on the bestselling book by Pulitzer Prize-winning reporter and author David Finkel. Jason Hall, who wrote the screenplay of American Sniper, makes his directorial debut with Thank You for Your Service and also serves as its screenwriter. Jon Kilik (The Hunger Games series, Babel) produces the film, while Ann Ruark (Biutiful) and Jane Evans (Sin City) executive produces.
User Reviews: It’s 2007. Adam Schumann (Miles Teller) and his squad return home from Iraq. It’s been a difficult tour and each one faces his own demons. Adam’s wife Saskia (Haley Bennett) is desperate to help him but he’s unwilling to open up to her. Upon arriving, he’s accosted by Amanda Doster, the wife of his dead comrade.

First, thank you for your service. There is always a problem when the movie starts with "Inspired by". It couldn’t even be "Based on". For a fake story, it needs to be more concentrated. It rambles around with too many characters. Miles Teller does some good work as well as the other actors. The PTSD stories are individually compelling but the plot is lacking. The telling is flat as the audience waits for the inevitable reveal at the end. I would be more drawn in if the movie stays with Teller and Bennett. I find compelling moments but the overall viewing experience is less than thrilling.