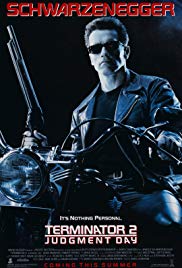 Storyline:
Over 10 years have passed since the first cyborg called The Terminator tried to kill Sarah Connor and her unborn son, John Connor. John Connor, the future leader of the human resistance, is now a healthy young boy. However another Terminator is sent back through time called the T-1000, which is more advanced and more powerful than its predecessor. The Mission: to kill John Connor when he’s still a child. However, Sarah and John do not have to face this threat of a Terminator alone. Another Terminator is also sent back through time. The mission: to protect John and Sarah Connor at all costs. The battle for tomorrow has begun…
Written by
Eric ggg
User Reviews: A Terminator(Arnold Schwarzenegger) was sent from the future to kill the unborn son of Sarah Connor(Linda Hamilton) in the original. Now, that Terminator has been sent back again but with a different assignment: Protect John Connor. John Connor(Edward Furlong) is now about 10 years of age and must evade a new Terminator sent to kill him;The T-1000(Robert Patrick). Sarah, John, and The Terminator journey together on their quest to stop Judgement Day, with a trailing, shape-shifting Termiantor trailing from behind.

This is the greatest of the Terminator trilogy. I have watched three times in the past year and have not found anything that Cameron could have improved on. The move is a masterpiece in every aspect of film. Schwarzenegger’s acting might not be incredible but this is the perfect role for him. He isn’t supposed to show emotion or feelings. He is a machine. I hate almost every one of his movies besides this trilogy because he is a horrible actor but he works perfectly into this role.

The special effects are incredible beyond belief. The shape-shifting T-1000 is some of the greatest animation I have witnessed in cinema history. It absolutely blew my mind when I first experienced this visual extravaganza. The animation looked so real(remembering this was a good ten years). The movie included fast-paced action along with some clever sci-fi drama/horror. The idea of a vast army of machines taking over the world after sending off warheads to every major city should be scary enough. But the T-1000 has very little lines and is just creepy enough to make twitch when you see him.

Sci-fi movies can rarely be made in such way that can be looked at as works of art. This is one of the few exceptions. The prediction of judgment day with Hamilton watching a playground full of kids be burnt to the ground is an absolute brilliant portrayal of Armageddon. The theme that men will destroy themselves is also shown throughout the movie also and is even said by The Terminator" It’s in your nature to destroy yourselves". This brings the movie to a whole new level of sci-fi.

Overall, Termiantor II: Judgement Day is an absolute must see classic. If you have not seen it, buy it! Because once you have seen it, you will want to do so anyways. It is fast paced and highly enjoyable for just about every audience.

I highly recommend this movie.