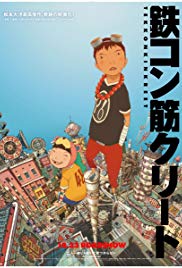 Storyline:
In Treasure Town, life can be both peaceful and violent. This is never truer than for our heroes, Black and White – two street kids who claim to traverse the urban city as if it were their own. But in this town, an undercurrent of evil exists and has its sights set on the pair of brothers, forcing them to engage in battle with an array of old-world Yakuza as well as dangerous assassins vying to rule the decaying metropolis, Treasure Town.
Written by
Trenton Thompson {[email protected]}
User Reviews: Hyperknetic animation helps along a sometimes too sprawling narrative of homeless street kids White and Black who leap from building to building in the neon streets of Treasure Town.

Treasure Town looks like an abandoned psychedelic amusement park that’s been over run with urban sprawl (which is pretty much the center theme of the film, the lose of balance, lose of innocence, illustrated through the symbolically named White and Black). Actually almost all of the characters have names reflecting some kind of duality, "Choco" and "Vanilla", "Dusk" and "Dawn" etc.

Black is the muscle, somber and always ready to fight to defend "his town" While White is the more innocent, slightly brain damaged younger of the two who can’t dress himself but can leap from the backs of moving cars, like la parkour runners bitten by radioactive spiders. "Chinese Monkeys can ride clouds" White states at the beginning of the film, referencing certain aspects of China’s mythic "Journey To The West", before they begin their matrix leaps/gliding across the city. The first ten minutes of which, are the best moments in the movie(and no it is never explained how they can fly, leap, fight as they do, so much so it’s easy to forget how vulnerable as children they are, which is used to get effect).

The trouble comes when there’s too many Yakuza characters given too much back story, too much over inflated psychodrama with Black attempting to rid himself of his solitary monster like Minetaur persona (this time a Greek myth of the bull monster locked in the labyrinth), and not enough explanation of who the mysterious villain was, who were his henchmen refereed to as both "killing machines" and "aliens" more than once, and what if any connection did he have to re-developing the town, killing the kids, his mission from God, and the mysterious organization who lent him the monsters? That being said, I was emotionally absorbed into the film enough by that point, and satisfied with the unique fluidity and vividness of the color palettes, to ignore the weaker points of plot, til the movie was over. Enjoyable and unique anime, but like so many it reaches for seriousness, when whimsy would be a better fit.

Storyline:Set in entertainment venue Toshimaen, the story takes us to young obsessed women who are handy and active with their mobile telephones, which is normal enough. Except the photographs and the videos are takin...

Storyline:Etsuro is a loner who does not leave his place. He is isolated, has no friends and suffers emotionally after failing to gain acceptance into college. He attempts suicide, but is even a failure at that. He ha...

Storyline:In their hometown of Hirosaki, Aomori Prefecture, Akinori Kimura (Sadao Abe) and his wife Mieko (Miho Kanno) open an apple orchard. Because of Meiko's allergic reaction to pesticides, without the help of che...

Storyline:Older, wiser but still a wandering loner, the blind, peace-loving masseur Ichi seeks a peaceful life in a rural village. When he's caught in the middle of a power struggle between two rival Yakuza clans, his...