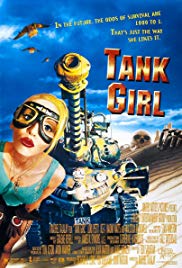 Storyline:
Tank Girl (Rebecca) and her friends are the only remaining citizens living in the wasteland that is Earth, where all the remaining water is controlled by Water and Power, the mega corporation/government that runs the territory. While incarcerated at W + P, Tank Girl and her new friend Jet Girl break out and steal… a tank and a jet. After meeting some mutant kangaroo/humans, and rescuing her little girl (adopted by her friends), the kangaroos and the girls kick Water and Powers’ butt.
Written by
David Flaherty <[email protected]>
User Reviews: This should have been the best film of the year, but instead the bureaucrats at MGM/UA decided to let "focus groups" (ever notice how unclear these so called focus groups can make a film!?!) decide what worked and what didn’t. That’s when the studio stepped in and butchered Ms. Talalay’s masterpiece! This film would have made so much more sense had the studio not changed the ending and left in the flashback scenes in their entirety (as it is, only one shot remained, and it makes NO SENSE WHATSOEVER if you’re not aware of the BUTCHERING JOB the studio execs did on this film!!!). Still, this is one of the most original films I’ve seen to date, and think that it still deserves more credit than it ever got! Ms. Talalay and all did a stupendous job!