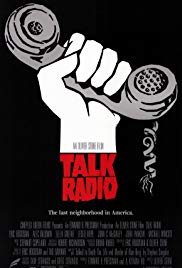 Storyline:
An acerbic radio talk show host based in Dallas starts what could be an important few days when he discovers that his controversial late night show is about to be “picked up” by a nationwide network of radio stations. However, all is not perfect for him, because on top of troubles with his love life and fears that the management of the network will try to alter the content of his show he has to cope with a neo-nazi group who have been angered by his forthright opinions.
Written by
Mark Thompson <[email protected]>
User Reviews: I have never been a great fan of Oliver Stone, often because I have found his films to be forced, preachy and generally flawed. The two Stone films I truly like are JFK and Talk Radio, yet Talk Radio takes the cake for being Stone’s finest achievement. Stone is a director whereby you are either a fan or you are not, it is safe to say that before watching Talk Radio I was not fond of the guy and considered one of the most overrated directors in the film industry, though after watching Talk Radio some of my perceptions have changed. Talk Radio is an unsettling and amusing attack on what is now known as "reality TV".

Talk Radio follows a self-indulgent, dysfunctional, determined, hysterical, outrageous and perplexing radio host, named Barry Champlain who hosts a controversial late-night radio show in Dallas. Quickly becoming well known for his bold and quirky air-presence he becomes a late night sensation, whereby depraved junkies, delinquents, racists, sociopaths, sickos, perverts and morons call in to be ridiculed on air. The film shows the rise and fall of the man’s career, carefully making an accurate portrayal on freedom of speech. Originally adapted from a stage-play, the film attaches itself to the theatre theme that it was originally built around, wonderfully conveying the film’s fierce nature.

With the ferocious energy and non-stereotypical air, Talk Radio brings all the hilarity behind "crass media". It remains even more poignant today than it was in the late ’80s. The film goes into depth studying the likes of arrogance, self-obsession, offensive behaviour, controversy, hypocrisy and ignorance. The film shows through a controlled manner how it is good to have a personal opinion and freedom of speech, yet it is something that should be used wisely rather than shamefully blunt. Stone tries to show how freedom of speech is a crucial importance in life, but is something that we should be wary and cautious about. The film asks the question of "is our main protagonist just the same as the sad people who call up the show?"

Stone fabulously creates the film’s key set-piece (the radio station) with an ambition and cold atmosphere. He then succeeds in capturing the isolation, fear, ambiguity and the dangerous emotions that are built up at the radio station. Eric Bogosian is perfectly cast as the isolated, self-absorbed and complex genius, Barry Champlain. He fits the role perfectly letting off his lines with such enthusiasm, urgency, perplexity, brusqueness and ultimately the bold hilarity of his offensive nature. The performance brims with spark, which was evidently robbed of an Oscar nomination. His voice suits the character, being that a primary element of a radio host and his power of acting along with tragedy and comedy works brilliantly.

There is a strong use of editing in Stone’s films and Talk Radio boasts some of his cleanest, most rhythmic editing. He uses beautifully controlled camera techniques, which differ from being calm to suddenly becoming turbulent. There is a vibrant energy behind the film, with its raw and wonderfully delightful script working as a centre-piece for the greatness of the film. The striking and virtuous cinematography stands out in the moments inside and outside the studio, most impressively capturing the city at night. Not forgetting the hauntingly heartbreaking and yet darkly funny climatic "spiral to decline" is ultimately remarkable cinema.

Talk Radio is an essential modern masterpiece, I am certain you will be surprised by just how great it really is. I highly recommend Talk Radio for anyone interested in media or film. Talk Radio is a fine example of top-notch, intellectual and insightful entertainment, which still packs a well-earned wakeup call. Finally, if it was not for Eric Bogosian the film would not be the fun, delightful and enduring masterpiece it is today.