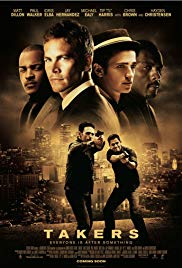 Storyline:
A seasoned team of bank robbers, including Gordon Jennings (Idris Elba), John Rahway (Paul Walker), A.J. (Hayden Christensen), and brothers Jake (Michael Ealy) and Jesse (Chris Brown) Attica successfully complete their latest heist and lead a life of luxury while planning their next job. When Ghost (Tip T.I. Harris), a former member of their team, is released from prison he convinces the group to strike an armored car carrying $20 million. As the “takers” carefully plot their strategy and draw nearer to exacting the grand heist, a reckless police officer (Matt Dillon) inches closer to apprehending the criminals.
Written by
The Massie Twins
User Reviews: I have wanted to see this movie since the first trailer I saw last year. I am a big fan of heist/action movies. Seeing Idris Elba and Michael Ealy and Paul Walker in the trailer, I knew I would at least get my quotient of eye candy. After seeing some of the reviews for this movie, I had very low expectations.

Takers turned out to be a decent heist movie. They didn’t do anything that was all that original. It was pretty predictable. It was just mindless entertainment that I enjoyed watching. I thought there was some good action sequences…I wish there were more of them. There was more melodrama than I was expecting, but I think it helped give the movie an ounce of depth. Don’t expect Oscar worthy material or big unexpected plot turns and I think you will end up enjoying it.