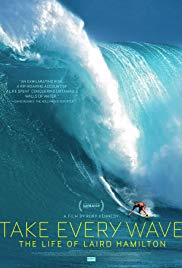 Take Every Wave: The Life of Laird Hamilton (2017)

Storyline:
This is the remarkable story of an American icon who changed the sport of big wave surfing forever. Transcending the surf genre, this in-depth portrait of a hard-charging athlete explores the fear, courage and ambition that push a man to greatness–and the cost that comes with it.
User Reviews: Greetings again from the darkness. The face of his sport. An American icon. A living legend. Each of these would be accurate in describing super-surfer Laird Hamilton. Oscar nominated in 2014 for her LAST DAYS IN Vietnam, documentarian Rory Kennedy (daughter of Ethel and Robert F Kennedy) delivers the most in-depth look yet at Hamilton and his unconventional life.

Before he was born, his pregnant mother underwent a procedure that basically created free-swim time for the fetus (Laird). Whether this played a role in his life as a water man can be debated, but after his dad left the family to join the Merchant Marines, Laird’s mom Joann Zerfas moved with her young son to Hawaii. Her free- spirited nature certainly influenced Laird’s approach to life, and we are led to believe that as a 4 year old, he encouraged the union between his mother and Bill Hamilton, the best known surfer of the time.

We view some incredible archival footage of Laird’s early years, along with photographs leading through his childhood. In fact, it isn’t always easy to tell what is "old" footage and what is new from the lens of cinematographers Alice Gu and Don King. Even if you find Hamilton’s personality and approach off-putting, you will likely be awed by the surfing footage. His younger brother Lyon describes him as a 100% disobedient child, and we learn Laird was often picked on as one of the few white kids in a Hawaiian school in the 1970’s. He found solace from school and an abusive step-dad in the "honesty of the ocean", where if you do it right you are rewarded, and if you make a mistake you pay the price.

It doesn’t require a psychology degree to see that Laird eschews most rules and has pretty much lived his life according the tide patterns and swells of Maui’s north shore. He has been heavy on ambition and conquering fear, and a bit light on societal norms and loyalty (ex- wife and his fellow Strap surfers). Director Kennedy is balanced in her approach here. As we begin to judge him by our standards, she reminds us of his unique nature  stand-up barrels in 7th grade, refusing to join in the parade for a high-paying career in modeling or acting, etc.

Known as the master of big wave surfing (he never competed on the traditional pro surfing tour), Laird’s life as a true Water Man took him paddle surfing through the English Channel, and the early stages of wind-surfing, connected surfing, tow-surfing, and hydro-foil boarding. He and his buddies were the first to ride the infamous Jaws waves of Pe’ ahi.

Along the way, we learn about the beginnings of his relationship with former pro volleyball player Gabrielle Reece and how he shifted ever-so-slightly into a family man role  without losing his desire to continually conquer the ocean. We see his intense training program and the beat up body he now has to work around. There is a bit of a peek into the surfer community and the jealousies and tension that aren’t obvious to outsiders. Laird’s "fear defect" is accompanied here by periodic punk rock music that seems the perfect fit for a man who is a natural phenomenon in the water and on a board, while showing no interest in the conventions most of us live by. You might not appreciate his personality, but there is nothing but respect for his courage in riding those 80 foot waves.

Storyline:Nothing is what it seems when the manager of an apartment building becomes obsessed with a new couple who move in.User Reviews:

Storyline:A Marine veteran working as a school janitor tries to mend his relationship with his son after a divorce. When his son is killed by a police officer found innocent without standing trial, he takes matters in...

Storyline:Two thieving teenage brothers, stealing money to help their sick mom, match wits with a troubled security guard stuck at the bottom of a forgotten well.User Reviews: Don't Tell a Soul has everything you look...

The Ultimate Playlist of Noise (2021)

Storyline:Marcus, an audio-obsessed high school senior, learns he must undergo brain surgery that will render him deaf, and decides to seize control of his fate by recording the Ultimate Playlist of Noise.User Reviews...

Storyline:After his five-year-old daughter is murdered, a loving family man becomes convinced that the oddball down the street is guilty.User Reviews: