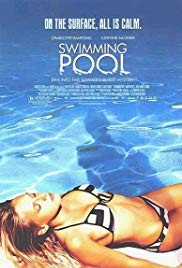 Storyline:
Sarah Morton is a famous British mystery author. Tired of London and seeking inspiration for her new novel, she accepts an offer from her publisher John Bosload to stay at his home in Luberon, in the South of France. It is the off-season, and Sarah finds that the beautiful country locale and unhurried pace is just the tonic for her–until late one night, when John’s indolent and insouciant French daughter Julie unexpectedly arrives. Sarah’s prim and steely English reserve is jarred by Julie’s reckless, sexually charged lifestyle. Their interactions set off an increasingly unsettling series of events, as Sarah’s creative process and a possible real-life murder begin to blend dangerously together.
Written by
Sujit R. Varma
User Reviews: Our neighbor Donna has a knack for buying offbeat DVDs, and ‘Swimming Pool’ is one of the more. She asked us to see it, and explain it to her. Charlotte Rampling plays the central character of Sarah Morton, a writer who seeks new inspiration at her publisher’s vacation home in the south of France. All is well and quiet until Julie (pretty and nubile Ludivine Sagnier) shows up, claiming to be the daughter that Sarah’s publisher failed to mention. Sarah and Julie are like fire and ice, oil and water, acid and caustic. Everything that Julie is, carefree, bold, and over sexed, Sarah isn’t. Then, what we see developing is Sarah using Julie as the inspiration for her writing. Sarah begins to encourage Julie. And Julie provides much inspiration! This isn’t a movie for those put off by nudity or the French habits of liberal sleeping around. But for those who like a clever and absorbing story, that will tingle your brain cells when it is over, having you asking "What exactly happened?" , then you will probably enjoy this one.

SPOILERS follow, quit reading if you have not seen ‘Swimming Pool.’ As the story progresses, Sarah gets less annoyed with Julie’s bratty and loose behavior, and actually seems to be inspired to experiment a bit too. Things turn sinister when Julie is putting off the night time poolside advances of one of the men she brought home, and ends up murdering him. Instead of admonishing Julie, Sarah helps her dispose of the body. The next day, when the village-dwelling gardener shows up, threatening to discover the deed, Sarah offers misdirection by stripping and inviting the old gentleman to her room for sex. BIGGEST SPOILER — when Sarah gets back to London, her publisher’s offices, meets ‘Julia’, the young daughter who looks and acts nothing like ‘Julie’ of the movie. My best interpretation, which is also based on comments by writer/director Ozon, is the ‘movie’ in France was in the imagination of Sarah, starting when she opened her window at night, and which was actually the book she was writing. As the movie ends in London, Sarah shows her publisher John the manuscript for ‘Swimming Pool’, which he doesn’t like. Then she gives him a copy of the published book, telling him he knew he wouldn’t like it, because it was a parody of him, and had someone else publish it.

Update: Saw it again January 2011 and it is a great movie to re-watch.

Storyline:René Laloux talks about his various films and his friendship with Roland Topor.User Reviews:

Storyline:Joachim is approached by a man believing him to be a Bosnian soldier who died on the day Joachim was born. Suspicious that he is the reincarnation of the soldier, Joachim travels to Sarajevo with his friends...

Storyline:Born in a small, provincial French town, Anaïs and Emma have been best friends since childhood. It's a friendship that's blind to differences in social backgrounds and character. Given incredible access, Séb...

Storyline:A world traveling pianist and her husband have decided not to have a baby, but then he sees a surprise childbirth on a flight and tampers with her pill.User Reviews: But at the end it s too much. The First h...

Storyline:For Tim and Chloe, happiness is day-to-day and unattached. But tomorrow summer ends. Their daughter, Tommy, is going back to school and this year, they promise, she won't miss that big date.User Reviews: &qu...

Storyline:Jack 19, Lisa 17, and Mathis 10, become suddenly orphans. Each of them reacts in his own way to the family catastrophe.User Reviews: