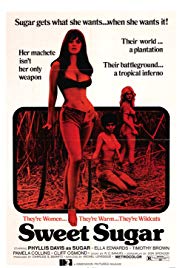 Storyline:
Prostitute Sugar is set up by a corrupt politician. She is convinced of the futility of appealing her case in the courts and signs on to a chain gang run by the notorious Dr. John who performs cruel medical experiments on the people who work for him.
Written by
Eric Conrad <[email protected]>
User Reviews: It is surprising that we did not see more of Miss Davis. A few Love American Styles, Sweet Sugar, Terminal Island, a Love Boat or two, Dan Tanna’s secretary, and that was about it. Given her obvious "attributes" and her being such a good sport about sharing them with the camera, I would have thought producers would have been lining up to sign her. I could have seen her as a Charlie’s Angel, as a Bond girl, as one of J.R. Ewing’s other women on Dallas, and other things. Spoilers throughout from here: Here she plays what is described as a prostitute, although, she denies being one, who when caught smoking a joint, gets railroaded onto a sugar plantation prison for 2 years, and takes the deal rather than facing something worse(?). Actually it’s not as bad as some prison movies. The prison is not as strict at times seeming like a summer camp- that is between torture, rapes,and the sexual based experiments from the prison warden, a dimented, cackling Dr. John. However, Phyliss is the star and she never loses that smirk. More accurately, the star is that body, which is accented with Daisy Duke type shorts and halter tops with, of course, no bra, as one of Dr. John’s experiments seems to be how long Sugar’s abundant bosom can remain firm while cutting cane every day without one. The catalyst that moves the plot along is when Sugar refuses Dr. John’s advances and has sex with a guard, for which she is whipped. But just one stroke with the whip? In keeping with you the spirit of the movie, why not a hard paddling and having her rub a sore bottom instead? This one hits you with everything and if you only like half of it, the movie served its purpose.