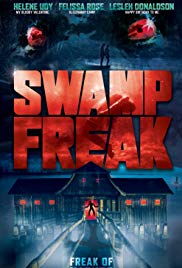 Storyline:
Six college students go into the wetlands to find their missing professor after he takes off in search of the mythical and deadly monster known as the ‘Swamp Freak’.
User Reviews: When I sat down to watch "Swamp Freak", it was without any knowledge about what it was about, who starred in it, or what to expect from it. I was interested in it solely because it was a horror movie and because of the title.

The title should have triggered a bell somewhere, because this was a blatant rip-off of the "Swamp Thing" creature, although to a less successful extend.

The movie starts out by spending way too long on following a guy walking around in the woodland area in the beginning of the movie. And that basically set the premise for the rest of the movie.

A serious amount of time is wasted on showing scenic views of the nature. While it is beautiful, it is not essential for the movie. This resulted in an incredibly slow paced and very uneventful movie, with no real solid storyline.

I will say that "Swamp Freak" does have some good atmospheric music, although a bit too loud in comparison to the rest of the sounds in the movie.

The creature is painstakingly obvious just a guy wearing a suit plastered with vegetation. And the sound that it made was just too much, it sounded like it should be the sound of some large predatory beast, not a two legged man-thing from the swamp.

All in all, "Swamp Freak" was not an impressive or memorable movie in any sense, and I managed to sit through a whopping 40 minutes of it before I gave up out of sheer and complete boredom.

"Swamp Freak" is not a movie that I have any intention of returning to finish, because there was just nothing worthwhile to hold my interest here. My rating of "Swamp Freak" is a mere 3 out of 10 stars.