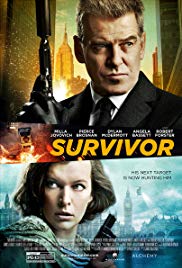 Storyline:
A State Department employee newly posted to the American embassy in London is charged with stopping terrorists from getting into the U.S. That puts her right in the line of fire and she is targeted for death and framed for crimes. Discredited, she is forced to go on the run while she tries to clear her name and stop a large-scale terrorist attack set for New Year’s Eve in Times Square.
Written by
Ben Read
User Reviews: I was really looking forward to this film, Director James McTeigue had made me an instant fan with "V for Vendetta".

Pierce Brosnan did an admirable job with the material that he was given, evoking the same ice cold villain persona that he had perfected in such films as "The Fourth Protocol" and "Don’t Talk to Strangers".

Milla Jovovich is a decent actress but much of her role involves reacting to situations with close ups of shock/surprise. It was not a good fit.

Supporting actors including Robert Forster and Angela Basset round out the impressive cast but they are largely wasted.

I see 2 main issues with this film:

1) The storyline is very clichéd, especially the predictable 3rd act and much of the dialogue is very stilted. 2) The CGI in many parts is sub par and takes you out of your suspension of disbelief.

Having said all this, I still found it to be a competent thriller worth watching with these caveats.