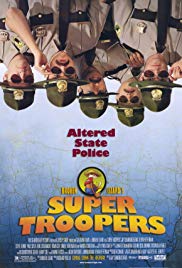 Storyline:
Thorny, Mac, Rabbit, Foster and Farva are Vermont state troopers out to have a good time. Stationed in a remote area near the Canadian border, the troopers, avid pranksters with an affinity for syrup, have a knack for screwing up on the job. But when budget cuts in the town of Spurbury threaten their livelihood and pit them against arch-rival Spurbury P.D., the five friends try to straighten up and fly right. That is, until a dead body is discovered and a possible drug ring is unearthed. The super troopers spring into action attempting to solve the crime, save their jobs, and outdo the local police department.
Written by
Anonymous
User Reviews: This was a welcome change of pace, a film that was a bit independent and a bit mainstream, yet all in all, was still hilarious. With an unknown and unproven cast, this film captured a certain sense of zeal within a viewer, certainly making the viewer wish highway patrolmen were this funny and irregular all the time. Funny, even though the comedy was sometimes low brow, this film certainly earned its accolades at the Sundance Film Festival.