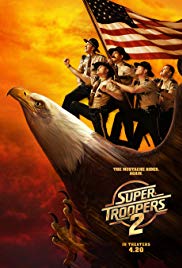 Storyline:
Several years after the first film, the officers have been fired from the Spurbury Police Department after taking Fred Savage on a ride-along that resulted in his death. Farva (Heffernan) is now a construction supervisor, with Mac (Lemme) and Rabbit (Stolhanske) working for him. Thorny (Chandrasekhar) works in logging, and Foster (Soter) is living with his girlfriend and former coworker, Spurbury Police Chief Ursula Hanson (Coughlan). Mac receives a call from his former boss, Captain O’Hagen (Cox), to gather the group and meet for a fishing trip in Canada. Once the group arrives, they find that O’Hagen’s intention had been for them to have a meeting with Vermont Governor Jessman (Carter). She explains that during a recent land survey, it was discovered that land in Canada was originally designated for the US. Canada has agreed to hand over the land, and Gov. Jessman needs to set up a police department to take over from the Royal Canadian Mounted Police in the region. She invites the …
User Reviews: The first Super Troopers came out 17 years ago, and while the first movie is extremely funny, and the other Broken Lizard movies, like Beerfest & the Slammin Salmon, are funny, this movie either tries too hard to be a rehash of the first, or the comedy just doesn’t hold up the same over time.

You don’t really get to see much of the boys actually out as "cops" until the second half of the movie, as the first half is mostly spent on "fish out of water" stuff, aka America vs Canada shtick that isn’t all that funny. The whole "Canada is different than America, Eh? Soorry!" stuff didn’t appeal to my funny bone, but once the boys hit the "crisis" point in the movie and had to actually hit the road as "cops," there were some good moments. I just wish it didn’t take so long to get there. From that point, it’s kind of a paint by numbers Super Troopers 1 plot remade for a sequel.

It’s pretty much a one time watch, then forget.

Oh, and the funniest part in the entire film is a Fred Savage cameo that happens during the credits, so don’t miss it. They build up to it during the film.