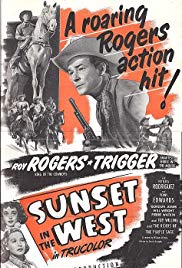 Storyline:
Near the border, outlaws are hijacking trains and using them to transport large quantities of rifles. Roy gets involved when the train that was to pick up his cattle fails to stop. Helping out the Sheriff, Roy brings in a suspect. He identifies him as a wanted man but the outlaw escapes with Roy as a hostage. Roy is taken to the gang leader’s house where another hijacking is being planned. They also plan to get rid of Roy.
Written by
Maurice VanAuken <[email protected]>
User Reviews: Herbert J. Yates splurged for color in this Roy Rogers western where he and Gordon Jones, former deputy sheriffs to Will Wright, are helping out their old boss. The populace of Wright’s town is up in arms at his inability to stop train hijackings. The worst part is that there seems to be no rhyme or reason for them.

As Roy investigates it’a a very sophisticated ring of gunrunners that’s settled in this Pacific coast town and they have contacts in a lot of places. And Roy’s not the only one investigating the gunrunning either.

Romance is provided by Penny Edwards who was one of a few women substituting for Dale Evans as Roy’s leading lady while she taking care of their child. And together with Gordon Jones playing the dumber than a post Splinters is Estelita Rodriguez giving out her comic style with a Hispanic touch. She did a number of Roy Rogers westerns but she’s best known for playing in Rio Bravo as Pedro Gonzalez Gonzalez’s wife.

Not the best of his westerns, it’s a bit overplotted for a B western, but Roy’s fans will be pleased.