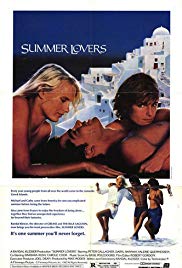 Storyline:
A young American couple go to the Greek islands for the summer and are dazzled by the beauty and the uninhibited people surrounding them. The young man meets and begins an affair with a French woman, an archeologist working on a dig. The young American woman discovers this and goes to confront the other woman. The French woman is quite taken with the American woman’s photographic work, and the three become very close.
Written by
David Carroll <[email protected]>
User Reviews: Summer Lovers is a classic! One of Daryl Hannah and Peter Gallagher’s first films, it is a tale of love and romance set on the incredibly romantic Greek island of Santorini. It is about an American couple that has just graduated from college and decides to spend the summer on the island. They are in love and are going to be married when they return to the States. However, a beautiful, young French archeological student attracts the attention of Peter, and an affair ensues. Peter tells Daryl, who, surprisingly, goes to meet the other woman and they become close friends, close enough to be able to share Gallagher! This film is a must-see for anyone contemplating travel to Santorini or, for that matter, the rest of the Greek isles. The scenery alone makes the film worthwhile, and you would be surprised how little has changed since 1982! I was there in 1992 and again in ’93, and it was fun traveling around by motor-scooter and recognizing a lot of the places from the film. Oh, and for anyone thinking about getting married anytime soon, Santorini makes a perfect honeymoon destination!