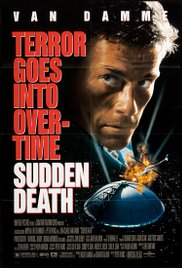 Storyline:
Some terrorists kidnap the Vice President of the United States and threaten to blow up the entire stadium during the final game of the NHL Stanley Cup. There is only one way and one man to stop them…
Written by
Volker Boehm
User Reviews: Van-Damme is known for acting in two film genres: Action and Martial-Arts. His best martial arts film is BloodSport, also thought to be one of the best movies of all time in it’s genre. This movie – Sudden Death – is his best action film.

If you like action movies, you’ll love this one. If you are a Van-Damme fan, this is a must-see.